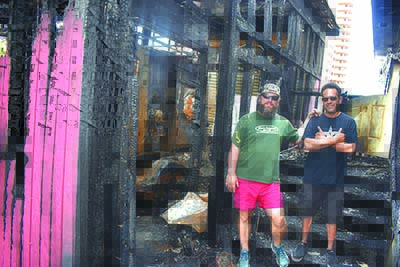 By John Mullen
Orange Beach City Council praised Moe’s Original Bar B Que for its work in the community during the COVID-19 pandemic while granting a six-month variance to operate a food truck in the parking lot of the restaurant until repairs can be made from a May 25 fire.
“Guys y’all are very loved in this community and we are very grateful for all you do,” Councilman Jeff Boyd said. “The cops, the firemen, everybody loves you and we just appreciate you. Thanks for getting back up and running.”
One of the co-owners, Mark White, said the outpouring of the community in the aftermath of the fire has been overwhelming.
“The support from the town and the community and everybody has been absolutely unbelievable,” White said.
The variance ends in six months but council members told the owners if they haven’t been able to rebuild by then it could be extended.
“We’ll make it work,” Orange Beach Mayor Tony Kennon said. “We’ll make it happen.”
The fire at Moe’s occurred around 9 p.m. on May 26, as employees were closing up and late customers were finishing their meals. There were no injuries reported.
Moe’s owners, who have been at the Orange Beach location for 14 years and completed a major upgrade to their restaurant facility just two years ago, are waiting for a report from insurers as to whether they will renovate the building or tear it down and rebuild.
The variance will allow Moe’s to continue to serve its signature dishes daily at its Perdido Beach Blvd. location (just east of the Rouses Shopping Center) from its catering RV beginning at 11 a.m. daily.
Moe’s fire started in its smoke pit and spread to the restaurant and kitchen. The OBFD had responded and put out the fire within 20 minutes of the 911 call.
Moe’s received an outpouring of support from its facebook post about the fire. Within two days, a local band, Hundred Dollar Car, was hosting a fundraiser for Moe’s employees at another Orange Beach restaurant, OSO.