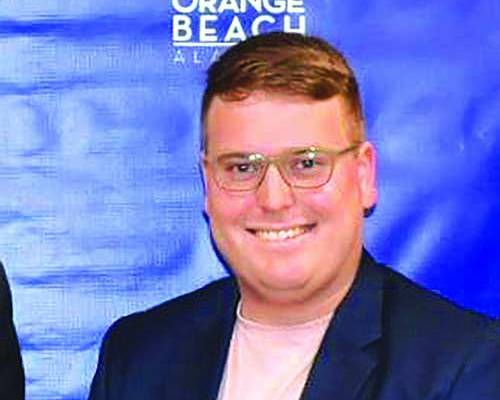 By Marc D. Anderson, City of Orange Beach
The Orange Beach City Council has recognized the heroic actions of resident Chandler Rayborn (pictured) in the aftermath of Hurricane Sally during a devastating fire on Jubilee Point Road at the home of his neighbors. They were unaware of the blaze and Rayborn’s quick actions to notify his parents of the fire saved their neighbor’s lives.
Chandler woke up to go to the restroom and when he did his window was open and he saw orange flames and went and woke his parents up, said Councilman Jeff Boyd. “He got them up and got them outside and went next door to the neighbor’s house. They were sound asleep, dead asleep. And they banged and they banged and they banged. Needless to say guys they were in water chest deep and waist deep getting to it. Had Chandler not woke his parents up, he would have never gotten the Saunders out of the house,’’ said Boyd.
“The second part of that story is that as they got the Saunders out of the house and the firemen were coming over, swimming hoses down Jubilee Point to get there. The Rayborns – Melissa, Jack and Chandler – had to stand and watch the fire jump from the one house to their house and both houses burned to the ground.The Saunders may not be here had you not done the heroic act that you did,” Boyd said.
Boyd said he had kayaked to the scene of the fire that night. “All of those fire guys, with their love, they swam those hoses to the fire to save the third house. Had they not swam to the houses, we would’ve lost a third and it possibly could have gone through the neighborhood.”
Boyd presented Chandler with the framed letter of commendation signed by Mayor Tony Kennon and the entire council and also a city challenge coin. Challenge coins are presented to individuals who go above and beyond the call of civic duty to make a difference in the community. The coin represents the city’s values: “Integrity, Excellence and Family.” Additionally, Chief Kimmerling presented Chandler with a special Orange Beach Fire Rescue helmet.
“Without these quick actions: recognition of this being an emergency, making that call to 911, directing us to where we need to be, we may not have been able to make the difference that happened that night,” chief Kimmerling said. “So I again want to commend you very much for your work to do this.”