O.B. to dedicate historical marker at Perdido Pass on April 18 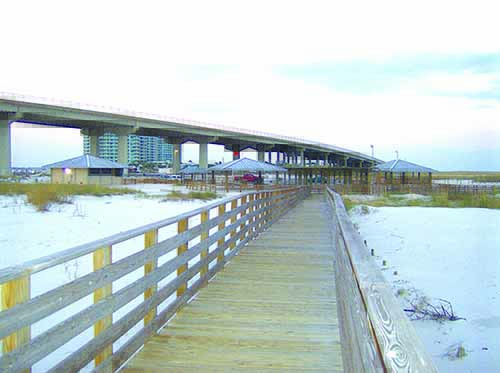 Orange Beach will honor its historical heritage by unveiling a marker on April 18 at 2 p.m. at Perdido Pass,. All are welcome to attend the unveiling ceremony of the historical marker was written by local author Margaret Childress-Long.
The marker details the history of Perdido Pass, how it was originally located 3 miles to the east and how the current pass was formed after the Hurricane of September 1906. The marker also shares the story of the first buildings on the shoreline and the first bridges to span the waterway. The marker will also honor the city’s charter fishing fleet and the two families – The Callaways & The Walkers – that created that industry in the city. The unveiling of the historical marker is part of the City of Orange Beach’s participation in ALABAMA 200.
The ceremony will take place at the newly refurbished Seawall Park at Alabama Point (aka the fishing wall) at Perdido Pass, on the south side of Perdido Beach Boulevard, on the west side of the Pass.
For more information, visit alabama200.org or call 251-981-6629.
Childress-Long, a member of the Baldwin County Historic Development Commission, said there are currently two historic markers in Orange Beach: one at Bear Point Cemetery paid for by the OBFD and a second at the Coastal Art Center, site of the original Orange Beach Hotel, paid for by the State of Alabama.
The City of Orange Beach will pay for five more historical markers, with the final two slated to be installed in 2019.
Childress-Long said her composition for the marker includes recognition of the group of local men – Walkers and Callaways – that dug the ditch in 1906 to help create Perdido Pass. “The hurricane that year did the rest,’’ she said.
Members of the Walker and Callaway families are expected to attend the ceremony for the installation of the marker.
“I also talk about the seven acre lake that was there, and bothof the bridges and dates on side two,’’ Childress-Long said.
The two sided marker weighs 182 pounds are was made by Corey Swindle, owner of the Fairhope Foundry in Fairhope. T
It is the hope of Alabama 200 and the local historic commission that there will be a total of 84 historical markers throughout Baldwin County by 2019, according to Childress-Long.
The Perdido Pass marker will be placed in the grassy area to the right of the bridge. It will be mounted on concrete so it will be easily accessible on both sides.
According to the official website, ALABAMA 200 is “the state’s official bicentennial commemoration and will consider a rich and complex history made every day by people like us. Whether they lived here for centuries or came from far away, Alabamians made this land of natural beauty and diversity, innovation and change, challenge and resilience, their home. Their stories embrace some of the most significant moments in national and world history. Between January 2017 and December 2019, Alabamians all over the state and beyond will create and take part in educational and enriching opportunities to discover, explore, preserve, and share those stories.”
For more information, visit alabama200.org or call 251-981-6629.