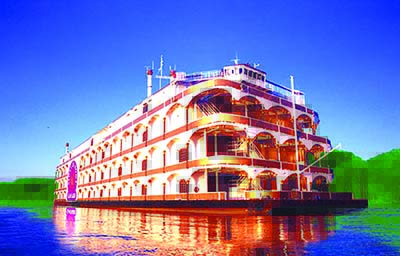 O.B. developer buys largest riverboat in world; Pensacola a possible final destination
Orange Beach developer Larry Wireman has purchased the largest riverboat in the world, The Glory of Rome, and it is now making its way towards what could possibly be a permanent home in Pensacola.
After traversing the Ohio and Mississippi Rivers, the riverboat moored at at the mouth of the Mississippi River just south of Venice Louisiana waiting for storm related waves in the Gulf of Mexico to calm down.
It is now in Bayou La Batre and should pass through Fort Morgan, Gulf Shores, Orange Beach and Perdido Key this month on its way to dockage in Pensacola sometime in the next week.
“She’s the largest riverboat and gaming boat they’ve ever made,’’ Wireman said. “She’s got an occupancy rate of 5,000 people plus crew. She’s a big ol’ baby.”
The ship housed a casino across the river from Louisville, Kentucky, until Indiana ended its requirement that casinos be housed in operating riverboats. The ship left Indiana on Aug. 11.
Glory of Rome, built in 1998, is 452 feet long and 100 feet wide. It is powered by six 2,000-hp engines used for propulsion and ship operations.
Wireman also owns the second largest riverboat in the world, the Argosy, which is about 10 feet shorter than The Glory of Rome. It is currently going through repairs in Bayou La Batre.
“I wasn’t losing enough money on her so I thought I’d get another one,” Wireman chuckled. “I’m going to turn it into a convention center, a hotel and maybe a dance studio. And a big restaurant,” he said.
Unlike the Argosy, the Glory of Rome doesn’t need much work unless Wireman decides to turn part of it into a hotel.
“It depends on what we do with it,” he said. “It’s got three restaurants on it now and we could open it up today for a convention center. But if we turn it into hotel rooms, we would have to do quite a bit of work on it.”
There’s a possibility it will find a permanent home in Pensacola and that would suite Wireman just fine.
“We’re talking to two or three different groups right now,” he said. “We are talking to Pensacola, and we’re pretty far along with discussions. I love Pensacola. I am just a little concerned if it’s got enough people. This is a big boat.”
It would also be a potential shot in the arm for the Pensacola economy.
“It will go to the port of Pensacola and the Pensacola Pass and right up to the port,” Wireman said. “We’re talking to the port about making a deal with them. As you can imagine, we’ll have to have a lot of cars and a lot of parking. I think we can really help and bring a lot of people into town if that’s what they want. We’ll probably put 250 to 300 people to work.
“I love the people in Pensacola. I think we can work something out with them.”
Jacksonville is also in the running for a permanent home for the riverboat.
“We’re talking to Jacksonville very strongly,” Wireman said. “Back before the virus, we were talking to Key West really strongly. It would be housing in Key West more than anything else and that was for the Argosy VI.”
Both riverboats could also be used for cruising, but Wireman said that’s really not what he’s looking to do.
“We could haul passengers, but I just don’t think I’m planning on hauling passengers,” he said. “I think I’m going to put her on maybe permanent mooring and let her go up and down with the waves, but I think that’s going to be it.”
When it first opened as casino in 1997, the Argosy VI laid claim to being the largest riverboat in the world and was docked in Cincinnati.
According to a published report its use as a casino ended in 2009 and it was sold in 2015, but the story didn’t identify Wireman as the buyer.
Port of Pensacola Director Amy Miller told the Pensacola News Journal in an email that the ship may dock at the port before getting work done to convert it to a restaurant, entertainment and conference center. She also confirmed the port is in negotiations with the ship’s owner to have it docked at Pensacola permanently.
“If we are able to reach an agreement with the company, we are looking at potentially developing a site on the east side of the port in the area identified in the Port Vision Plan for non-traditional, maritime-related uses,” Miller said to Jim Little of PNJ. “This would include development of new public access to that area.”
Miller told PNJ that specifics about the negotiations were confidential under Florida’s public records laws, but she said any agreement would ultimately have to be approved by the City Council, adding that the port was a long way from a deal at this point.
“We think this could potentially add a fun and unique entertainment venue to the Downtown waterfront and could fit nicely with the overall plan for developing the underutilized property on the east side of the Port,” Miller said.