Home / June 17 News / O.B. going to get tough on golf cart drivers not yielding to pedestrians

O.B. going to get tough on golf cart drivers not yielding to pedestrians 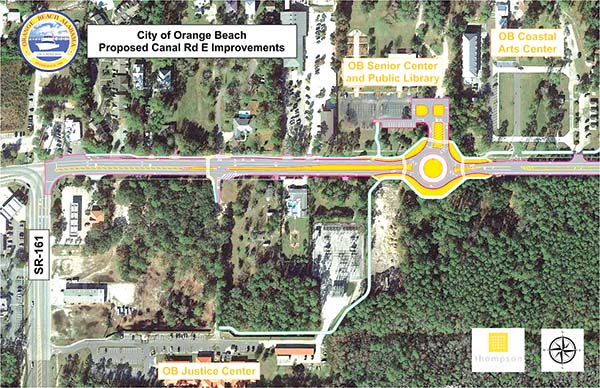 O.B. going to get tough on golf cart drivers not yielding to pedestrians
By John Mullen
Orange Beach recently added signs along the sidewalk on Canal Road to alert golf cart drivers to yield to those walking or walking dogs along the roadway.
“All golf carts they really need to remember that pedestrians have the right of way on the sidewalk,” Mayor Tony Kennon said. “We put the signs up. We’re going to have to get tough on them because they have got to allow the pedestrians to have the right of way. You just can’t run people off the sidewalk. That’s just not the right thing to do.”
But relief may be on the way soon. Included in the engineering contract for the widening Canal Road is a golf cart path along most of Canal Road east of Doc’s Seafood Shack and Oyster Bar.
Orange Beach is also planning another sidewalk on the west side of town connecting Oak Street, or where the Undertow is, to The Wharf. Both projects are under contract for engineering and design work.
“Actually, it’s going to be from Bay La Launch in Bear Point all the way to (State Route) 161,” Kennon said. “There’s a lot of variables in it because we tied it in with widening of Canal Road but you could probably look at $1 million for the golf cart path improvement.”
Canal Road will be widened to three lanes from Doc’s to Wilson Boulevard using mostly money from BP oil spill fines. It will add a much-needed center turn lane as well as a roundabout in the area of the Senior Center and library.
“The widening of Canal Road which is roughly $2 million in Restore Act money,” Kennon said. “Then we’re paying to put in the roundabout and do all of the golf cart path. I think we’re going to end up in the $4 million give or take range for all of it with $2 million of it being Restore Act money. Could be a little bit more or a little bit less.”
The end result will give the city its first designated golf cart path connecting Bear Point where golf carts a prevalent to the center of town at the Canal Road and State Route 161 intersection.
“Once we get this golf cart path what we’ll do is take the sidewalk and widen it to 10 feet,” Kennon said. “By going 10 feet you’ve got room for both.”
The original contract with Thompson Engineering for the entire work on Canal East of Doc’s was approved in April, Finance Director Ford Handley said.
“We approved not to exceed $45,700 with Thompson on April 21 to provide engineering and land surveying services for the addition of a roundabout from (State Route) 161 to Wilson,” Handley said. “The cart path was examined in part of this task order.”
Community Development Director Kit Alexander said work won’t start until after the summer of 2020 and the target date for completion is the fall of 2021.

Sidewalk will extend from Oak St. to Wharf

At the June 3 council meeting, Thompson Engineering was hired to design and oversee construction of a sidewalk from The Wharf to Oak Street on the north side of Canal Road at a cost of about $128,000.
“We’ve got multiple options we’re working on,” Kennon said. “The continuation of frontage road down to right before you get to Dr. Brown’s office and then the sidewalk from that point all the way to Wharf Parkway East. The other option is not to continue frontage road but just a sidewalk from where it ends there at Captain’s Cove. But either way, there’s going to be connectivity from Oak Street westward to the Wharf Parkway East so that you can get to The Wharf.”
Alexander said the timetable on this project hasn’t been set and there are many issues to resolve before it can move forward.
“A lot of it depends on the availability of right-of-way, amount of utility relocation, and ALDOT permitting,” Alexander said. “We also need to apply for a TAP (Transportation Alternatives Program) grant and that award won’t happen until late fall of this year.”
Pictured: A rendering of what the traffic circle on Canal Road will look like; Orange Beach is adding signage to remind those riding golf carts to yield to pedestrians on paths.