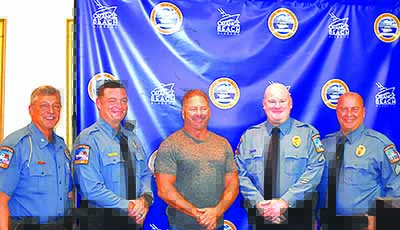 Orange Beach Police Chief Joe Fierro announced promotions for Cpl. Brian Kincaid, Sgt. Jeremy Mote and Sgt. Bryan Johnson during the City Council meeting on Tuesday, Aug. 21.
Chief Fierro said Cpl. Kincaid served with the U.S. Marine Corps for six years, earned a bachelor of science degree from Auburn University, worked for two years as a corrections officer in Tuscaloosa County before working for 10 years at the Northport Police Department. At Northport PD, Cpl. Kincaid served as a firearms instructor, investigator and patrol officer.
“He relocated down here to Orange Beach in 2016 with his wife Emily and his daughter, and now they have two daughters,” Chief Fierro said. “He was promoted to corporal in July of this year and as you can see he brings a lot of experience with him. He is part of our leadership team.”
Sgt. Mote began his career in Georgia as a dispatcher and then a corrections officer with the Rockdale County Sheriff’s Office in Conyers, Georgia for four years, Chief Fierro said.
“He received his police certification in Georgia and for 11 years he served as a deputy,” Chief Fierro said. “He is now a sergeant with us, a training coordinator for the department and he has done some instructing for us. He relocated here permanently after we hired him in November 2016. He is now on our SWAT team, and he’s a defensive tactics instructor.”
Sgt. Bryan Johnson began his career in 1996 in Dickson, Tennessee, Chief Fierro said.
“He was a canine handler there, a detective, shift patrol officer and he served two years as the chief,” Fierro said. “He moved here in 2011.”
Sgt. Johnson worked at the Gulf Shores Police Department before moving over to Orange Beach PD in 2014.
“He earned the rank of corporal in 2017 and we just promoted him to sergeant,” Chief Fierro said. “He is our canine coordinator as well.”