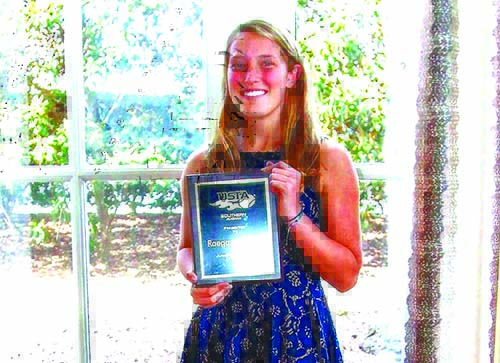 Raegan Mitchell (pictured) from Orange Beach has recently received the USTA Alabama Female Jr. Tennis Player of the Year award. She is a junior in high school and is the daughter of Rhett and Amy Russell. Rhett Russell has served as the tennis pro at the Orange Beach Tennis Center for many years.
Raegan is one of six children that play tennis in the family. Her older sister Blaeke plays college tennis at Campbellsville University in Kentucky. Brock, Racquel, Blaeze and David Rhett compete all across the state of Alabama and the south in their tennis divisions.
Raegan’s goal is to play NCAA Division I tennis. This award is definitely one of the highlights of her tennis career. Her tennis style is an unusual one. She has two backhand groundstrokes. When she was 7, she was asked, “Are you ready to move to one hand for your forehand?” Raegan responded, ”No mom, I am not doing it and you can’t make me.”
She is a straight A student and homeschools through First Assembly of God Christian School in Robertsdale, Alabama. Raegan wants to major in chemistry in college and possibly get a master’s degree. Raegan’s academic goal is to get her ACT high enough to get an academic scholarship also. Raegan has a tennis recruiting trip out of state in April this year. Raegan is a member of First Baptist Gulf Shores and is involved in her youth group. Other highlights of her junior tennis career include: representing Alabama at Southern Cup 2015, 2016 and 2019. She won the national bronze ball with her mom Amy Russell at the National Mother Daughter Clay Court Championships in Naples, Florida in 2019. She is going for the gold ball in October 2020.