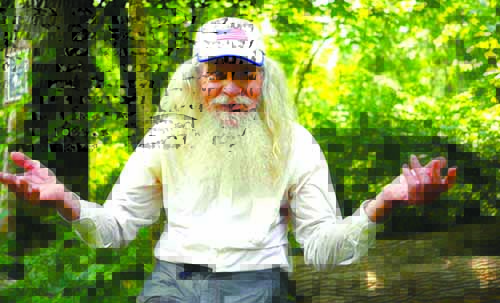 Octogenarian from Flagg Mountain is oldest to complete Appalachian Trail

An Alabama man became the oldest hiker to ever complete the Appalachian Trail on Nov. 7 when the 83 year old from Flagg Mountain completed his final section in Western Massacussetts.
As you would expect from anyone who completes the famous trail, let alone an octogenarian, M.J. Eberhart’s adventure was not without challenges. He took a tumble and bloodied his elbow in New Hampshire and limited himself to eight hours of hiking a day.
“I’ve a got a couple of skid marks on me, but I’m OK,” he said in a facebook post. “You’ve got to have an incredible resolve to do this.”
Hiking the trail in sections, Eberhart had already completed the climb up Maine’s Mount Katahdin by the time he started hiking the Massachussetts portion of the trail.
A retired optometrist, Eberhart, started his hike in February from Flagg Mountain, adding hundreds of extra miles to the route. The 2,193-mile Appalachian Trail runs from Springer Mountain, GA to Mount Katahdin.
The legendary and beloved hiker not only finished the world famous 2,193-mile Appalachian Trail (AT), he began his trek at Flagg Mountain, the terminus of the Pinhoti Trail, where the Southern Appalachian mountains actually begin. Many have advocated over the years, the Southern end of the AT should begin in Flagg Mountain instead of Springer Mountain in North Georgia.
Known as Nimblewell Nomad on the trail, Eberhart is the caretaker of a fire tower and cabins built by the Civilian Conservation Corps at Coosa County’s Flagg Mountain in the Weogufka State Forest.
Eberhart has already been featured in the Alabama Rivers Alliance short film documentary “The Last Last Hike.”
He is only one of two people to have finished all 11 National Scenic Trails, which include the Pacific Crest and Continental Divide trails. He has written a book, 10 Million Steps, about his Eastern Continental Trail hike.
“Sunny Eberhart is an inspiration to me daily,” said Maggie Johnston, Executive Director of Wild Alabama, who actually joined Nimblewell on the AT trek. “His longtime friendship has brought me joy and hope for the future many times. On tough days this thought comes to my mind… “wonder what obstacles Nimblewill is facing today?” I look forward to seeing him back home at Flagg Mountain soon.”
Wild Alabama and the Alabama Hiking Trail Society are throwing a Welcome Home party for Nimblewell at Flagg Mountain on Nov. 21.
Since he began hiking in 1993, Eberhart has trekked 4,400 miles from the Florida Keys to northern Quebec and Chicago to California on Route 66. He said he has found comfort and peace on the trail in the company of the tight-knit hiking community. Broken by a divorce and the loss of respect from his children, he eventually found peace and self forgiveness through nature. “I persevered to the point that the good Lord looked down on me and said you’re forgiven, you can be at peace,” he said.