Oliveth Archer, Alabama’s first female county commissioner, has not slowed down since “retiring’’ to Orange Beach 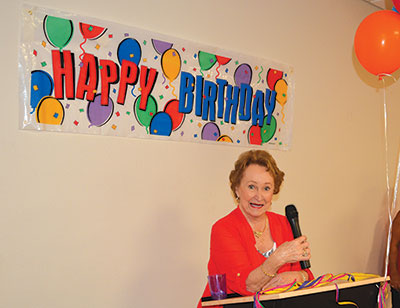 By Fran Thompson
Always quick to laugh at herself and with others, Oliveth Archer spent the day before her surprise 80th birthday party asking friends if they would be in attendance.
The day after, she finished off a leftover bottle of single malt scotch and wrote the appropriate thank you notes.
Held at the Orange Beach Senior Center, Oliveth’s “surprise’’ 80th was packed with friends and family enjoying each other and Oliveth’s easy going southern charm.
An Irvington transplant (Theodore High School), Oliveth moved to Orange Beach 26 years ago to “play golf and bridge and completely retire.”
Fat chance of that.
A shoulder injury played havoc with her golf handicap, but Oliveth not only played bridge, she helped organize at least three bridge groups. She still plays bridge a few times a week, and calls the game her “drug of choice.’’
Oliveth was greeting and seating fellow Catholics at St. Thomas By-The-Sea back when the congregation was meeting at rented space in the O.B. Winn-Dixie Shopping Center. You can still find her greeting fellow parishioners at the door at 5 p.m. mass every Saturday.
Oliveth had barely unpacked before she joined the South Baldwin Newcomers Club.
She has volunteered countless hours for the Chamber of Commerce and was one of the five founders of the Sirens of the Sea, Orange Beach’s first all women Mardi Gras society. She was the krewe’s president and queen in 2005.
Oliveth’s move came 11 years after her husband, former Mobile County Commissioner Jon Archer, died of a heart attack just as he was beginning a congressional campaign.
The Mobile County Republican Caucus recommended that Oliveth finish out her husband’s term. But Gov. Fob James had other ideas and appointed one of his friends to the post.
Oliveth won that seat in the next election cycle and became the state’s first elected female county commissioner in 1982.
Oliveth said those different times required different decisions. After one term on the Board of Commissioners, she retired from politics to spend more time with her grandchildren and travel with family.
And travel she did, taking a 16 year, 300,000 mile road trip in a 1981 Red & White Alabama Van she filled with five other women from among aunts and cousins.
“I’m so glad I did that,’’ she said. “We got to see everything. Nova Scotia, across Canada. For 16 years we did that.’’
Oliveth’s travel party never made reservations, preferring to stay at mom & pop motels, where they could back their van, always driven by Oliveth, up to the room and set up a bar in the trunk.
“We should’ve had a bumper sticker that read ‘we break for wineries,’’’ she said. “We liked those down-and-outs because we could just open the bar in the back. I wouldn’t let any of them drive. In the afternoon, I’d say we best find a place because it’s getting to be cocktail time for me.’’
Oliveth said she is afraid to travel these days. But she does pretty much everything else she wants to do.
Oliveth bought a beachfront condo next door to a friend of hers in 1990 and lived there for four years before leaving the Gulf for a place on Cotton Bayou, buying into Perdido Grande, where she has lived ever since. She’s exercised her way through two treadmills while watching boats come and go through Perdido Pass.
“Moving to Orange Beach was the smartest thing I ever did,’’ she said “I’m not sure I would have lived this long if I didn’t move over here.
“This is paradise.’’