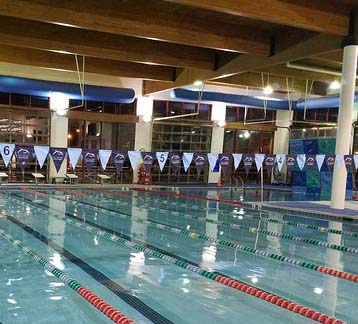 Gulf Shores voted to spend about $355,000 to redo surfaces around the pool at the Bodenhamer Recreation Center and also for doing renovations on locker rooms. The council met virtually from the Erie Meyer Civic Center on April 27 with only two items on the agenda.

“The city opened sealed bids on April 7 and Asphalt Services was the lowest conforming bidder,” Public Works Director Mark Acreman said. “This includes the deck repairs, base bid and the four additive alternates related to the renovations of the men’s and women’s restroom areas. There was one additional alternative for exterior drainage work that we elected not to move forward with. The project will include the renovation of the pool deck and adjacent staff offices as well as the women’s, men’s, girls’ and boys’ restroom and shower areas.”

Acreman said an attempt to fix the surface of the deck a few years ago didn’t work and the city decided to redo then entire flooring around the pool and offices.

“There are some issues we are trying to address with this project,” Acreman said. “There’s a deck-coating failure. A couple of years ago we attempted to seal the existing quarry tile that we had around the pool. Even through our best efforts that surface did not adhere. In this particular project we’re actually going to (remove) both the tile and the underlying concrete deck and completely repour that and put in new tile over the top. In addition to that, we need some additional channel drains around the perimeter of the pool to help with standing water around the entire pool. We’ll be addressing that with this project.”

In the locker rooms, the entire floor will also be removed and replaced as well and drains added to help eliminate standing water tracked out of the showers.

“Internally, in the men’s and women’s locker rooms and shower areas there is additional floor drainage needed,” Acreman said. “While we are tearing out the concrete underlying the deck material, we’re going to plumb new drains in the showers and locker rooms. So many times, the water will track right out unto the tile floors. There’s no drains there today to address this water issue. This will definitely help that situation there.”

The new deck will be topped with slip-resistant tile around the pool and in the locker rooms. Work is scheduled to begin in May and be completed by the end of July.

City staff were taking questions from the public during the meeting and one citizen questioned doing the work at the beginning of summer. Director of Recreation and Cultural Affairs Grant Brown said with the current restrictions due to COVID-19 and the warmer weather make it an ideal time for the work.

“We feel like now is a really good time to renovate the pool area,” Brown said. “We’re not sure when the center will reopen based on the COVID-19 situation we are in now and how quickly we can get back in. If we can get through this in early summer then in the fall and through the winter when its cold outside and people will need an indoor heated pool. We feel like it’s the right time to move forward. We’ve been putting this off for a couple of years trying to get this money budgeted and the right permanent fix for this problem we’ve been experiencing for a number of years.”

Councilman Joe Garris asked if there were still plans to renovate and expand the lobby at the Bodenhamer Center but those have been put off until the next budget year, Brown said.

“One of the projects we’re going to do with the Bodenhamer lobby renovations was to create some additional workout space for treadmills and other cardio equipment,” Brown said. “We still plan to replace the machines that are upstairs that need to be replaced and the ones that are able to be moved we plan to move them out to the Cultural Center. We won’t be able to without that additional renovation to bring any of that equipment down to an expanded space downstairs. But we are able to add cardio equipment to the Cultural Center as a bit of an escape for additional capacity.”

Also during the dual meeting the council:

• OK’d more than $5 million in expense vouchers including a $1 million advance payment to the Alabama Gulf Coast Zoo and a $3.5 million prepayment to Retirement Systems of Alabama.

• Awarded a bid for mosquito control products to Target Specialty Products and ADAPCO based upon the various unit prices submitted.