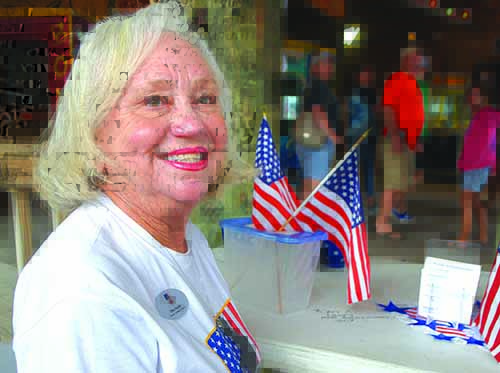 Operation Re-Connect’s Lauren Murphy is exactly where she needs to be
By Fran Thompson
Ellen Murphy is sitting on a corner stool in the Flora-Bama’s upstairs listening room. She sips a Lite beer while talking to a reporter.
Perdido Brothers’ Jon Cook and Robbie Fleming are trading guitar licks on stage. Two tourists, one in a “Redneck Drinking Team’’ t-shirt, are dancing in an open space to her right.
The soon to be 70-year old Gulf Shores resident is exactly where she wants to be.
A proud Air Force brat, Ellen is the first employee of Operation Re-Connect. Officially the non-profit’s director of community outreach, Ellen operates an information table and sells raffle tickets for a custom jeep (see sidebar) at a display table at a junction between gateways leading to the Flora-Bama’s three stages.
“I feel like my life is a book written by angels,’’ she said. “I know what I am going to be doing for the rest of my life. Even though it is a work in progress, I go home every night with a big old smile on my face, and I wake up every morning with a big old smile on my face, because I get to go out and do it again.’’
Although jeep raffle tickets are also available in the Flora-Bama Gift Shop, Ellen is also onsite to provide information about the charity that provides vacations for returning combat vets. In many instances, she connects with others from military families with laughs and, sometimes, even tears.
She recently met and befriended the family of General Joseph Votel, Commander, of U.S. Central Command. “His brother says he loves the Flora-Bama. So maybe I will get to meet him this summer,’’ she said.
Ellen’s father Colonel Robert Barton Murphy, was the Chief of Staff at Hickham Air Force Base in Hawaii when he retired in 1976. He served in World War II and the Korean and Viet Nam conflicts and amassed 6,000 pilot hours, including over 400 combat hours.
Ellen said her mom was remarkably strong, but her dad’s presence was felt and he was always the head of the household, even though he was often deployed for long periods. She grew up in Tennessee, Alabama and Virginia and graduated from high school in Germany.
“Operation ReConnect is so important to me,’’ she said. “Our mission recognizes the need for military children to have special time to reconnect when mom or dad return from combat deployment.’’
A University of Tennessee grad, Ellen first came to the area when offered a sales position on the Gulf Coast. After a year in Mobile, she moved to Gulf Shores and has been counting her blessings for the 16 years since then.
An accomplished runner before a fall, Helen is an active member of the Lower Alabama Parrotheads and is a graduate of the Gulf Shores Police Citizen’s Academy. She is also an ambassador for the Coastal Al. Chamber.
She was officially hired by Operation Re-Connect exactly three years after her father was laid to rest at the National Cemetery in Nashville.
“I turn 70 this month and the doctor gave me a clean bill of health for the next 10 years,’’ she said. “I want to do something that matters with it to honor my dad’s military career.’’