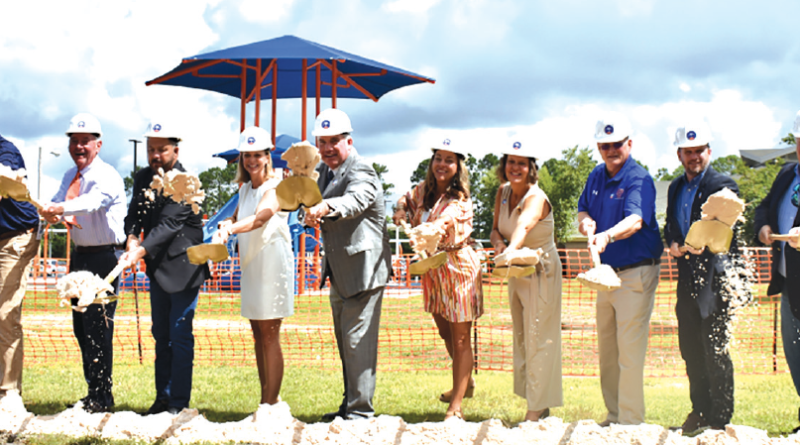 Orange Beach City Schools has already broken ground on a $6 million addition to Orange Beach Elementary School. The new 18,000-square-foot wing will include a cafetorium with a stage and a media/library room. The new addition is expected to be complete in May 2023 with phase two to follow. The second phase will include converting the current library to three classrooms and converting the current cafeteria into five classrooms and a breakroom. The project was designed by McKee and Associates Architects, Inc. Bayshore Construction is handling the project.
Superintendent Randy Wilkes said the new library will be state of the art. “The library should be the hub of our school,” he said. “It all starts there with reading and I can’t think of a better way to break some ground than for new facilities like this.”
School Board President Robert Stuart thanked the elementary school teachers in attendance at the groundbreaking ceremony. “There are very few people that walk around that affect a life more than a teacher,” Stuart said.
He also thanked his fellow school board members. “When you do a school system in 90 days, you know there are things that pop up,” he said. “There are things that happen. Things that we expected and things that we didn’t expect. But through it all the board, the men and women who make up the Orange Beach School Board, I cannot say enough about. Thank y’all. Thank you, very much.”
Stuart said as the system continues to grow and the more successful it becomes, more issues will crop up, but he asked for “a little patience” because there is a plan. “I’ve been trying to tell parents who have been contacting me,” he said. “I said, ‘Look, don’t expect a perfect opening.’ There wasn’t a perfect opening when we were a county school, right? But we’re going to be real close to it. So if you have any issue, I just ask that you go through the proper channels to get those issues solved, whether it be a student issue, a parent issue, any issue you might have, go through the proper channels and we’re going to do the best that we can to solve that issue. I’m excited. I’m proud to be a Mako. Go Makos!”
Before heading outside to toss some ceremonial dirt, Mayor Kennon thanked the school administrators, staff and teachers because they are the backbone of any capital investments the city and school system make.
“I love the addition and we’re going to rock and roll on whatever additions we need to do because we’re going to be so great we deserve it, y’all deserve it; but that stuff, those buildings, mean absolutely nothing, they’re there because of you. You’re the capital that needs to be invested in. We’re going to invest in buildings but you are what matters. And I think every one of us has committed to the human capital being the number one priority, the number one concern for every one of us because to be great, it’s about y’all. And I don’t want to beleaguer that point but every time I get an opportunity in the public to talk about our school system, I’m going to talk about our staff and administration and the difference y’all make in lives. And I’m just telling you, Nick Saban would be proud of this team, and the skies the limit. I know y’all know the skies the limit and you have been unleashed to be the best you can be. And I’m there, the council’s there, we’re all there to give you what you need to make that happen. I give you my word.”
Pictured: Councilman Jeff Silvers, Councilman Jerry Johnson, Mayor Tony Kennon, Orange Beach Elementary School Principal Mary Catherine Law, Superintendent Randy Wilkes, and Orange Beach City Board of Education members Shannon Robinson, Tracie Stark (secretary), Robert Stuart (president), Nelson Bauer (vice president), and Randy McKinney.