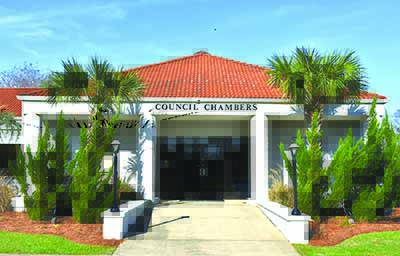 The community of Orange Beach goes back to at least the early 1800’s as evidenced by property deeds. As an incorporated city, it is quite young. Following Hurricane Frederic on Sept. 12, 1979, with all its publicity, Orange Beach was discovered. The build boom was on – houses, marinas, and restaurants sprang up. The first condominiums were built in 1984. With this sudden expansion, it was evident that local control and guidelines were needed. By August 1984, citizens voted to incorporate. An election for mayor and city council was held and officials were sworn in on October 14, 1984. Orange Beach became a city with 1,010 official residents and operated out of a room in the community center.
John and Marjorie Snook, owners of Gulf Telephone Company and landowners here since the 1950’s, donated five acres for a municipal complex on Hwy. 161. The City of Orange Beach moved into the complex in September of 1988.