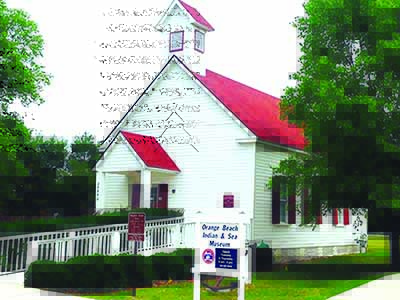 Electric service was brought to Orange Beach in 1948. In 1956, John M. Snook developed the first wireless telephone system in the United States utilizing in-home hand-held phones that were transmitted to Gulf Telephone’s switching system in Foley from a 113 foot tower in Orange Beach. The old bricks of the tower can still be seen across Hwy. 161 from the City Complex.
The Orange Beach Volunteer Fire Department was established in 1961. January 1974 brought a Public Water service to the area. Sewer service began in 1982 and local police protection began in May of 1985. The U.S. Post Office moved into its new building in 1987. Marjorie Snook Park was dedicated in October 1999 and the 1910 School House was moved there to become (below) the ‘Indian and Sea Museum.’ The main access road into the complex was named John M. Snook Drive. Today, the complex consists of (above) City Hall, most city offices, and the U.S. Post Office.