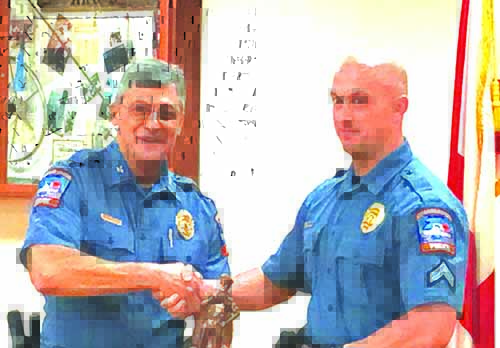 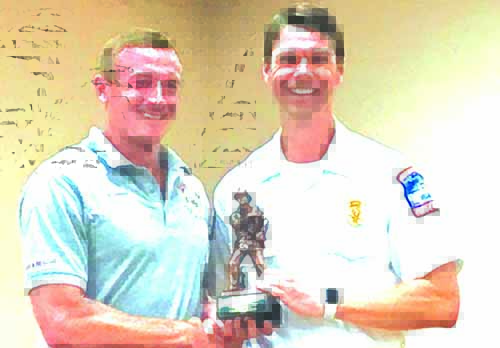 By Marc Anderson
Orange Beach Fire Medic Robert Simpson and Police Cpl. Bailey Mahler were honored recently at the Orange Beach Community Center.
Simpson was named Firefighter of the Year and Cpl. Mahler earned the title of Officer of the Year. Each year, the awards ceremony is organized by the Orange Beach Community Association.
With nearly 100 people in attendance at the November ceremony, Police Chief Joe Fierro and Fire Chief Justin Pearce presented the awards to rounds of applause.
Chief Fierro said all of his officers voted for the award recipient this year and Cpl. Mahler came out on top for many reasons. Firstly, after the death of Sgt. Travis Coleman due to a medical emergency in March, Chief Fierro said Cpl. Mahler was called to step up and lead Coleman’s patrol division.
During difficult conditions, Cpl. Bailey earned the respect of his entire staff. “He’s done an outstanding job,” Fierro said.
Chief Fierro also pointed out an incident where Cpl. Bailey showed true leadership and courage.
“About this time last year, he was on his way home in his personal car and he watched a car veer into the Intracoastal (Waterway),” Chief Fierro said. “The driver went into the canal. (Cpl. Bailey) was the only one there. He was in Gulf Shores at the time. He pulled over, ran to the car and with no regard for his own safety … he went in and worked tirelessly to get this unconscious driver out of the car, who was deceased but he didn’t know that at the time. Eventually the Gulf Shores police arrived and he was given a little bit of help but that is another reason we all serve and Bailey demonstrated it flawlessly that night. He put aside everything. He’s a selfless, dedicated public servant and he has done a great job and I know he will continue to be. So Bailey, congratulations. Thank you.”
Chief Pearce’s commendation of Simpson echoed that same selfless public service.
“We have been very blessed to have Robert in our department,” Chief Pearce said. “He’s very smart, very educated, always willing to help, and always willing to learn. There are two things that stand out about Robert in his career. Some of you guys may remember when Island Dunes caught on fire. I know the police department played a big role in getting folks out. Robert carried a Great Dane down a ladder on his shoulder during that fire, huge dog. He did it by himself. He didn’t do it for the fame or glory, he did it because it was what was needed to be done.”
More recently, Chief Pearce said Simpson spent one of his days off with a special needs adult, helping him to swim in the Gulf.
“The family had contacted several cities trying to find someone or a city that would allow some of their personnel to assist with their special needs son swimming in the ocean or Gulf, wherever they ended up,” Chief Pearce said. “Robert did this willingly on his day off. He did not accept any benefits, he did not ask for anything. He did not even want any recognition. Unfortunately for him, you know how social media is, and once word got out, word traveled fast. He did have to do a couple TV interviews for it but these are just a couple of the acts that have been publicized. There are many acts that most will never know and that’s the way Robert would prefer. This is what makes Robert special. When no one is looking he is more kind and generous than when he is being watched. This is why he is the Orange Beach Fire Department’s Firefighter of the Year.”
City Administrator Ken Grimes added that seeing the city’s first responders go above and beyond every day is what makes Orange Beach special.
“Thank you for what you do,” Grimes said. “Thank you to the families for what you do in supporting these men and women.”
Pictured: Orange Beach Police Chief Joe Fierro, left, presents the Officer of the Year award to Cpl. Bailey Mahler; Orange Beach Fire Chief Justin Pearce, right, presents the Firefighter of the Year award to Fire Medic Robert Simpson.