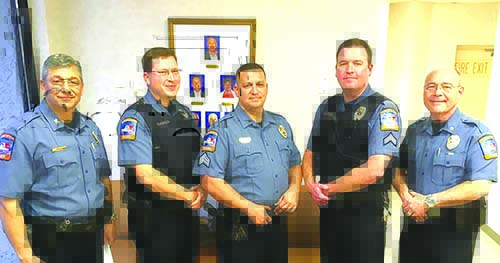 Orange Beach Police Department Promotions
Orange Beach Police Chief Joe Fierro announced three promotions during the City Council meeting on Tuesday, Feb. 20. He introduced Cpl. Josh Watkins, Sgt. Rodney Kirchharr and Lt. John Simonson to the council. “Josh joined us in 2016 from the Tuscaloosa Police Department and since he’s been here he’s worked his way to the corporal’s position,” Chief Fierro said. “He was promoted, effective the beginning of this month, Feb. 1. I wanted to have a chance for everybody to see Josh and know that he’ll be out there serving all of you.” Fierro said Sgt. Kirchharr enlisted with the U.S. Marine Corps in 2000 and served for 6 years, including a tour in Iraq. In 2006, he received his Alabama Peace Officers’ Standards and Training Commission (APOSTC) certification. He was then employed with the Bay Minette Police Department. “Although there has been a little bit of back and forth, he came to us in 2012,” Chief Fierro said. “He has since been promoted to corporal and now sergeant on Feb. 1. And you will see a lot of him out and about on the street.” Lt. Simonson started with the Orange Beach Police Department in 1998 as a reserve officer. “In 2001, he came on full-time with the police department,” Chief Fierro said. “He has worked up through the ranks as corporal, sergeant and now lieutenant of patrol, including the marine division and the beach. So he was effectively promoted Feb. 1 as well. And many of you already know him and you will be seeing a lot of him as well.” Pictured: (from left) Chief Fierro, Lt. Simonson, Sgt. Kirchharr, Cpl. Watkins and Asst. Chief Steve Brown.. (By John Mullen)