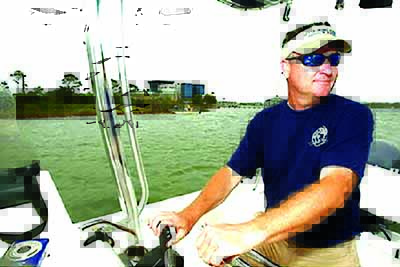 By John Mullen
In a partnership Mayor Tony Kennon says is a precursor to the marine research center the city is planning to build, researchers from the University of Alabama and Auburn University are planning a tar ball field study.
“This is a really, really big deal because it’s the first collaborative effort between two major universities through our new research center. It will be a tri-party agreement because we would help with the funding.”
Kennon said future projects will not likely require the city to help with the funding. “This is a great example of what’s to come and most of what’s coming won’t be with us having to fund it. We’re excited about this,” he said.
Coastal Resources Director Phillip West (pictured) said scientists who have been involved in the project since the spill will be running these field studies have been doing so since oil first arrived on south Baldwin beaches.
“The work was started by Auburn and Dr. (Prabhakar) Clements was a key part of that,” West said. “He’s now in the engineering department at the University of Alabama. It’s continuing his research in collaborating with Dr. John Hayworth and the engineering school at Auburn.”
There have been about 25 field surveys done in the 10 years since the oil spill, the proposal states.
“The objective of this proposal to complete a comprehensive 10th-year field survey along Alabama’s Gulf Coast region (extending from Orange Beach to Fort Morgan) to quantify current oil background levels,” according the proposal.

O.B. in line for $9.7 million from Restore funds for the center
Project will also include boat slips & docks in the Walker Marina boat basin
By John Mullen
Orange Beach is in line to get $9.7 million from the Restore Council for the center it plans to build in the old Walker Marina location on Canal Road east of Sportsman Marina. The city is also planning on building a new office and storage building for the Coastal Resources on south end of the property as well as build some docks and boat slips in the boat basin there.