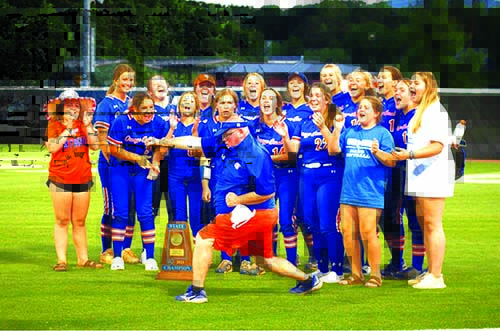 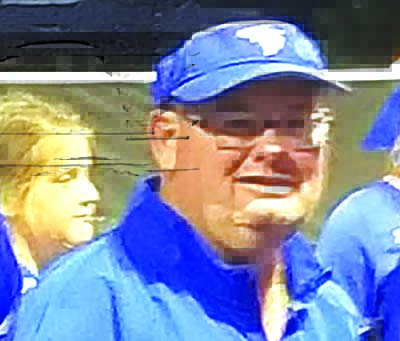 Retired Orange Beach Police Sgt. David McLain had already been coaching Pleasure Island girls basketball and softball teams for more than 27 years between rec leagues in Orange Beach and the program at Gulf Shores Middle School when Orange Beach High School welcomed its first students to a brand new building on August 12, 2020.
He had watched Orange Beach grow in both population and prosperity during those years. But he was as surprised as the rest of the island’s residents when Gulf Shores formed its own school system the same week that Baldwin County announced plans to build a new middle school in Orange Beach back in 2018.
He also saw it as an opportunity to fulfill a dream.
“When I was coaching on the sideline in rec league here or at the middle school in Gulf Shores, I always said if Orange Beach had a high school, I would love to coach there. But it was more like my dream,” McLain said after helping the Makos win the Class 2A state softball championship as a volunteer assistant. “God has blessed me. I’ve been coaching since the year I got here. It’s community. It’s home.”
McLain added that what he is now experiencing is as great as he thought it would be.
“I’m telling you once you win a state championship there is nothing quite like it. It’s an incredible feeling. And I feel like all the girls I ever coached are part of it. They have kept me going and kept me motivated for all these years.’’
McLain retired from the Orange Beach Police Department in early 2018, but he still works part-time at the Orange Beach Rec Center, coaches Makos’ JV and middle school girls basketball and is the logistics coordinator for Coach Chase Smith’s OBHS football program.
“There are very few people who have had that kind of an impact for so long to the kids of Orange Beach and Gulf Shores,’’ said O.B. City Manager Ken Grimes.
The cross country and track team captain at Troup High School in LaGrange, Georgia, McLain began coaching baseball in Huguley two weeks after graduating from high school in 1985.
He would go on to coach football, basketball and softball at Valley High School during his seven years with the Lanett Police Dept. He followed Lanett Police Chief Robert Vinson when Vinson took that same position in Orange Beach in 1995.
He immediately began coaching softball. Within two years, he was working as the OBES resource officer.
“The first year I was here they asked me to start coaching softball and we became pretty successful,” he said. “I had a rough childhood. Coaches were a big, big influence in my life. They knew what I was going through and they took me underneath their wings. And that’s the reason why I coach today. I feel God has put me into a position for this. I want to give back what they gave me.”
McLain said Makos varsity softball coach Shane Alexander was aware that he had worked with many of the girls on his team since youth league, and he readily accepted McLain’s offer to help out wherever needed.
“Coach Alexander has done an incredible job,’’ McLain said. “You can see why he was so successful before he got here. He lets the other coaches coach. Coach Hodo (whose 7th grade daughter Ava hit the walk-off championship winning homer) was incredible, too. He is recognized as one of the best hitting instructors in the southeast. and Mrs. Rebekah (Mathis) worked with our pitcher and had a multi-purpose role. We all worked really well together.’’
McLain said he knew the Makos, although young, were talented and had successful travel ball players in key positions.
“We thought we were pretty talented. Our goal was to win the area and get to regionals and then see what we could do once we qualified for regionals,’’ he said. “I thought we had a chance.’
McLain said it was at Regionals that the team rallied behind the idea that manifested into what would eventually become its mantra: “Why Not Us?”
“When we won the first two at Regionals, Coach Alexander said, ‘Why not us? Why not just go out and win it all?’’’
McLain said it helped that the Makos had played a difficult schedule on their way to a final 35-9 record, playing only five games against schools not above their classification.
They beat Hoover in a tourney in Gulf Shores. They beat Mountain Brook and Huntsville as well.
“We were down 6-0 to Huntsville and we came back and beat them. That is when the girls really started to believe in themselves. We might be 2A, but we beat a lot of 7A schools,’’ McLain said.
“We beat Robertsdale twice and they usually have a pretty good softball team up there. We were not ranked that high in the state, but we had a slogan that said ‘prove them wrong.’ And That is what we did. The last three games of the tourney, we beat the No. 2, No. 3 and No. 1 teams in 2A.’’
In addition to Orange Beach City Council being so supportive of the Makos during the season, the cohesion and friendships that developed among the players’ parents also paved the way for the championship, according to McLain.
“Our parents were so instrumental in this run. They were absolutely incredible,’’ he said. “Everybody was so close knit. There was such a closeness there among them. Softball is a long season with some long days. But there was never any fussing between parents. They stepped up to give us whatever we needed.’’
He is well aware of the adage that it is difficult to repeat. But McLain also knows that his entire team returns intact.
“If they come back and work hard, and I know that they will, there is a very good chance that we will repeat,’’ he said. “We have great girls and I know they won’t be satisfied. I believe they will stay hungry.’’