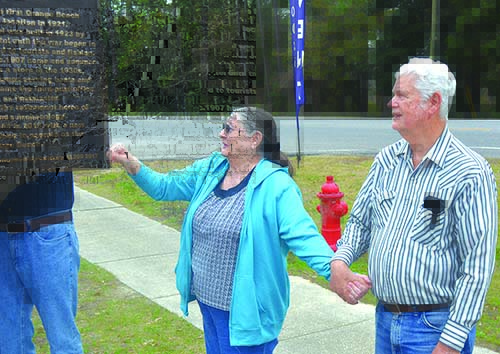 “This area, located along the southern shore of Wolf Bay, was the original ‘DOWNTOWN’ of Orange Beach. Beginning in the 1870’s, the two schooners of James C. Callaway were anchored near here in the deep-water Boat Basin. The schooners were used for importing supplies or exporting products like oranges, shingles, or turpentine sap. They later service the lighthouse beacons in the Gulf of Mexico.
“In 1909, D.R. Peteet bought 3,254 acres here that he called Gulf Bay Tract. He built a shingle mill near the community’s vital wharf. The 1920 Schoolhouse was also located here and was used on alternating Sunday’s by the Baptist and Presbyterians. In 1953 both built their own churches nearby. The Schoolhouse also served as a community meeting place and a place for the annual Community Picnic put on by the Home Demonstration club. The Club raised enough money to buy the land for a Community Center now located one mile east of here.”

“Elsie E. Diehl was the Postmaster of the first Orange Beach Post Office in 1901, and at a second location in 1921. Just to the west, the Orange Beach Hotel was built in 1923 by Hilda Callaway Dietz. She operated the hotel until the war began in 1941 when the coast was essentially closed to tourists and fishing.
“Just east of here, Captain Dan Callaway’s c. 1907 home and summer kitchen are still in use. The kitchen was a store in the 1930s, operated by Emmons Brown. It had gas pumps serving boats and the few cars in the area. In 1937, this became the third post office with Minnie Lee Callaway Brown as Postmaster.
“In 1971, Capt. Dan’s home became the retirement home of David DeJarnette, Father of Alabama Archaeology. The Orange Beach Hotel was demolished in 2015 with a new building of similar design built in its place to operate as the Coastal Arts Center of Orange Beach.’’
Original Downtown Orange Beach gets historical marker
The City of Orange Beach unveiled its sixth historical marker during a recent ceremony at the corner of Bay Circle and Canal Road, near Orange Beach Waterfront Park. The Bay Circle marker is the sixth of 10 historical markers that will be part of the city’s historical trail (see sidebar). The project is presented in conjunction with the city’s participation in Alabama’s Bicentennial Celebration.
Margaret Childress-Long, a member of the Baldwin County Historic Commission, led the ceremony and wrote the copy for all 10 markers. She said the project will be completed by early summer and a brochure/map is being composed as a guide for self guided historical tours.
Orange Beach residents Merle Harms and Sally DeJarnette were asked to unveil the plaque. Harms’ grandfather, Dan Callaway, and DeJarnette’s father, David DeJarnette, are mentioned in the Bay Circle marker.
Before the automobile industry took hold, the bayfront was the city’s main thoroughfare, and the Bay Circle area was the original downtown Orange Beach.
“I want to thank my parents for having the good judgement to retire here and find us a wonderful place to come,’’ said DeJarnette. “When they passed away, Jim and I said well, maybe we better just go on down and take care of the home place. So we did.’’
Following the ceremony, DeJarnette generously presented copies of a book she published using her father’s photographs and journal from World War II.
Harms shared a heart warming story about her family history and her ties to Orange Beach. “My father came with one of the dredges that dredged the canal,” she said. “And my great aunt who owned the hotel at that time had a party. And he and some of the other workers were staying at the hotel and my mother who lived over here [on Bay Circle] went over there and they ended up getting married. So if it hadn’t been for that hotel, I don’t know who my father would’ve been.”
For more information about ALABAMA200, visit alabama200.org. For more information on the historical marker program, email manderson@orangebeachal.gov or call 251-597-2982.
Pictured: Merle and Cory Harms unveil the O.B. historical marker at Bay Circle.
••••••••••
Orange Beach History Tour

• Perdido Pass *
• Romar Beach*
• Orange Beach Municipal Complex*
• Bay Circle*
• Coastal Arts Center*
• Bear Point Cemetery*
• Backcountry Trail
• Caswell
• Bear Point
• The Intracoastal Canal.
* Markers Completed
••••••••••
Marker Brochure Coming
“All of these people who are biking and walking around can [stop] at City Hall or over at the museum and we can tell them, ‘Hey if you want to know something about Orange Beach, go look for these markers,’”
– Orange Beach Historian & Author Margaret Chldress-Long.
••••••••••
Special History That Should Be Shared
“It goes way back and it is a special history. It’s really amazing as I’m now starting to make my little get-to-know-your- beach tour around the state, how little a lot of folks know about Orange Beach and what we do every year and we’re we came from.”
– Orange Beach Mayor Tony Kennon.