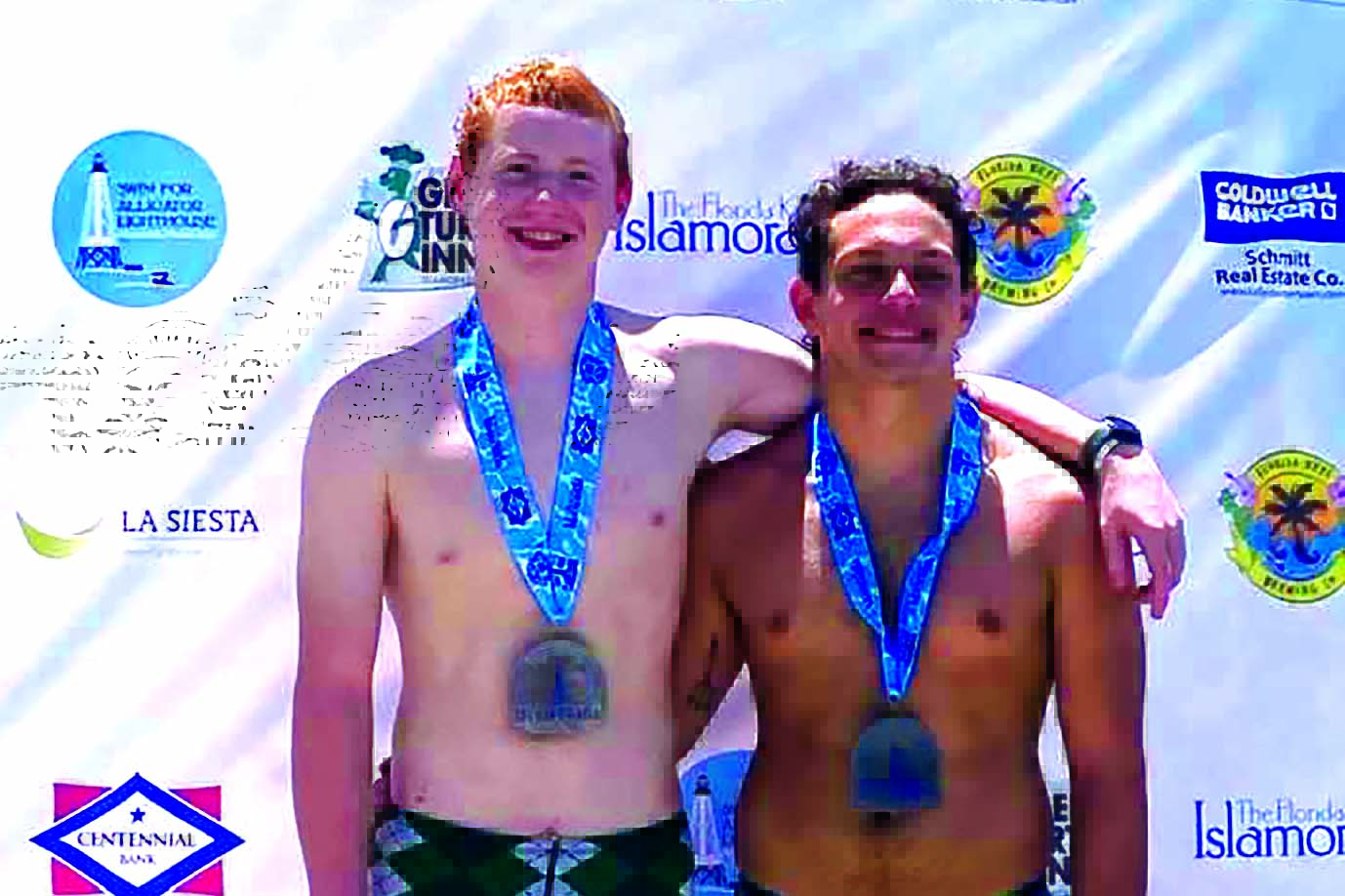 Patrick Conley & Liam Bickham complete a maritime adventure for the ages; Swim For Alligator Lighthouse one of world’s most challenging open water swims

By Tim D. Smith They’re Patrick Conley and Liam Bickham, Gulf Shores High School students not Moby Dick’s Ishmael, and they already live in a “watery part of the world.” The lure of ocean adventures beckoned, though, from hundreds of miles away, and led them on the adventure of a lifetime. The challenge: Swim for Alligator Lighthouse, according to Tom Ward of RedBull.com “one of the eight most challenging swims in the world”, eight miles of open water to Alligator Light off the coast of Islamorada in the Florida Keys, sitting equidistant between Key West and the mainland. Two years ago, Liam swam a one-mile leg when the course was shortened by a hurricane. Sometimes nature wins. This time, he and Patrick planned to take turns and swim the entire eight miles, four out and around the lighthouse and four returning, taking turns paddling a kayak in support, a task in itself that provided little true rest for the person not swimming. Lighthouse Larry, a world-renowned local artist, founded the feat of skill and endurance almost a decade ago after completing the swim and telling friends he thought everyone should try it. Proceeds sponsor scholarships for high school students and go toward restoring the dormant Alligator Lighthouse, named for U.S. Navy schooner Alligator which went aground on coral reef (now also known as Alligator Reef) in 1822 while serving as part of a Navy Anti-Piracy unit in 1822. Liam was the first person Patrick met on the bus to swim practice a year ago after Patrick moved from Alaska to Gulf Shores. It’s pretty easy to imagine Liam with his big grin welcoming the new young man. They became friends, and as this year’s challenge approached, Liam’s mom Mo, who is an accomplished swimmer in her own right, told Patrick he needed to do the swim with Liam. Patrick remembered the conversation. “Mo pretty much said, ‘I’m not going to swim this with him and you need to’, so I agreed.” Liam had already been to Florida’s Islamorada Key, where the curious and enchanted can discover warm ocean breezes and views, quaint shops, and art galleries filled with landscape paintings and sculptures of sportfish. His first journey had been tame in comparison to this undertaking. The same area that tempted Hemingway, creating Santiago’s “salao”, the worst form of unlucky, greeted Liam’s friend Patrick upon their arrival. “Iguanas everywhere,” Patrick recounted, thinking back to his first impressions. “The smell.” Cars and iguanas don’t coexist well. The ocean breezes dawned hot and sultry on September 11, 2021, not a good mix for an adventure, even if you’re considered some of the top endurance athletes in the world. For what it’s worth, no albatross was slain, but Patrick and Liam couldn’t help but sense an ominous foreboding as they began. The current battered Patrick on his first twenty-minute leg as he struggled to see through the murky depths, usually pristine and clearer than bath water but now clouded with seaweed and jelly fish, which stung him mercilessly. When Liam’s turn came, the pair swamped their kayak and dumped their support supplies into the Atlantic’s depths. “I never found out how others managed to prevent that,” Patrick said with his characteristic wry smile. Luckily, they salvaged some of the Gu, snacks, and water bottles intended for nourishment and sustenance on the trek. Even though Liam and Patrick began after almost all the other swimmers due to the staggered start, Liam passed every other team during that second leg. They found themselves charting the course for everyone else. Buoyed by the fact that officials floated in boats and jet skis along the route, their quest took a turn for the better about half-way out when the water began to miraculously clear, providing a spectacular view of the seabed and the coral. Patrick wasn’t as appreciative of the scene, though, when on his second leg he saw a barracuda dash into view to devour a smaller fish, bringing the swimmer to a halt for a moment before continuing. Luckily, when they rounded the rusty lighthouse, the current changed to give them a push. Unfortunately, it wouldn’t last as the waves managed to not only obscure the marker buoys each 400 meters but also push them off course and add distance and fatigue that only Odysseus could have appreciated. “You have to embrace the suck,” Liam says, “you know, make the best of the situation. It was so hot.” Late in the swim, Patrick thought, “Everyone else is doing it. It would be a shame if I gave up.” But almost everyone else labored behind them at this point as the pair was clocking almost thirty-minute miles under stark conditions. Patrick had grown dehydrated due to the limited drinking water, and his lips were parched and salty. Liam put the finishing touches on the swim, and as he approached for the homestretch, he still had enough energy to break into a strong butterfly stroke, to the delight of the announcer and fans. They finished in four hours and nine minutes, and the adventure was complete. So how do you top that? “Next time, we’re each going to do the whole thing,” Liam said. You have to believe, if anyone can do it, these two can. Pictured: Gulf Shores High swimmers Patrick Conley, a junior, and Liam Bickham, a sophomore, recently completed the Alligator Light in the Florida Keys. The eight mile, open water competition has been described as “one of the eight most challenging swims in the world.” Tim D. Smith is an English teacher at Gulf Shores High School. His young adult novel The Ghosts of Sand Island Lighthouse will be published by Touchpoint Press in the spring of 2022.