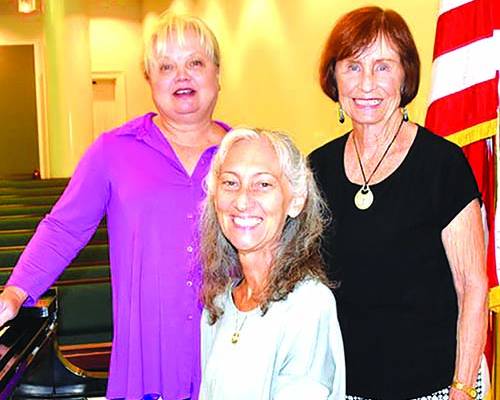 “Testament of Freedom”, featuring the words of Thomas Jefferson, will be a highlight at the annual Patriotic concert by the Chancel Choir of Gulf Shores United Methodist Church in the church sanctuary on Sunday, July 1 at 7 pm.
The concert program will also feature a number of favorite patriotic melodies as well as solos by popular local singers including Marsha Guyer, Janis Ray and Cody Johnson. Instrumentalists include organist Jackie Dahlman, pianist Kayla Dowling, trumpeter Dr. Michael Brown and percussionist Mark Stauffer.
Testament of Freedom’ celebrates several principles of our nation’s founding through the words of Thomas Jefferson. It was written and first performed during WWll to celebrate the 200th anniversary of Jefferson’s birth.
The choir is currently preparing for their November trip to Carnegie Hall in New York City where they will join other choristers in a concert directed by well-known composer/arranger Mark Hayes. Mr. Hayes spent several days at GSUMC last December working with the choir in an all-day seminar as well as directing the annual Christmas concert.
There is no charge for the patriotic concert. However a love offering will be taken at conclusion of the concert in support of K9sfor Warriors, a program partnering trained rescue dogs for veterans suffering from PTSD. Reserved seating is available for all GSUMC concert season supporters. For further information about the Patriotic Concert or the Chancel Choir Carnegie Hall trip, please contact the GSUMC office at 251-968-2411 or visit the church website at gulfshoresumc.org.
Pictured: Accompanists for the GSUMC Patriotic Concert are pianist Kayla Dowling (seated), o