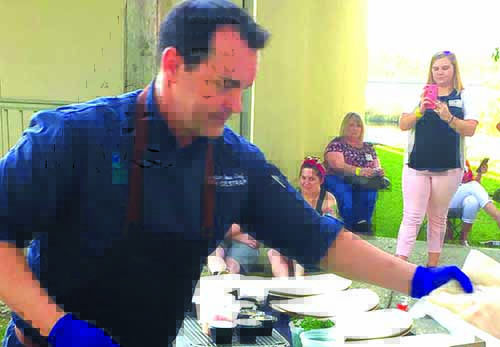 After two straight years as the Alabama Seafood Cook-Off runner-up, Chef Brody Olive is finally at the center of the winner’s circle. On June 29 at The Wharf in Orange Beach, Chef Brad Gilstrap (representing Chef Olive, who was out of town due to a death in the family) represented Voyager’s Restaurant at Perdido Beach Resort and won the top prize of the evening at the 3rd annual Alabama Seafood Cook-Off. Chef Jason Ramirez of Villaggio Grille, located at The Wharf, was named the runner-up.
Chef Gilstrap impressed the judges with Chef Olive’s “Fruitti di Alabama” recipe, which features three Alabama Gulf Seafood components: Pan Roasted Gulf Jolt Head Porgy, Summer Squash Jumbo Lump Crab Caponata, Topped with Crispy Rock Shrimp Piccatta.
“Third time is the charm,” said Olive. “The Alabama Seafood Cook-Off is a win just being selected. I love showcasing fresh Gulf seafood that some folks may or may not have seen or heard of, like this year—Rock Shrimp and Jolt Head Porgy. I cannot wait to take the best of Alabama’s summer crop to GASCO this year.”
“The competition was intense, but verified a lot of hard work,” echoed Gilstrap.
Olive and Chef Gilstrap are now set to represent Alabama at the upcoming Great American Seafood Cook-Off in New Orleans on August 6. Although placing well in recent events, Alabama chefs have not won the competition since Chef Smith in 2011. The chefs are also now automatic qualifiers for the World Food Championships at The Wharf November 8-14.
“The 2017 Alabama Seafood Cook-Off was a great success,” said Chef Smith, executive chef for the State of Alabama, 2011 Great American Seafood Cook-Off (GASCO) champion, and chairman of the ASMC. “Chef Brody Olive will be a excellent representative for the state of Alabama in New Orleans at the GASCO. He’s a very worthy King of Alabama Seafood.”
This year’s Alabama Seafood Cook-Off was once again followed by the Alabama Seafood Summit the very next day. The 5th annual iteration of the event, which was also held at The Wharf, celebrated Alabama’s seafood industry with a full day of presentations and a meal from Villaggio Grille.
In addition to Smith, this year’s judges included John McMillian, Alabama Commissioner of Agriculture and Industries; Chris Blankenship, acting commissioner of the Alabama Department of Conservation and Natural Resources and program administrator for the Alabama Seafood Marketing Commission (ASMC); Chef Josh Quick, executive chef of Odette and 2016 ASCO champion; Jason Burnett, founding editor of MyRecipes.com and Oyster Obsession; and David Holloway, food writer for Alabama Media Group. Martie Duncan, former Food Network Star finalist and creator of Martie Knows Parties, was the event emcee for the second year in a row.
Pictured: Chef Gilstrap.