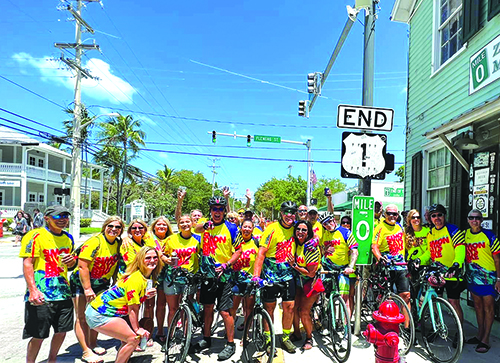 By Fran Thompson
Perdido based brothers Andy and Chris Mull had barely completed leading a recent fundraising bicycle caravan from the Flora-Bama to Key West when they started planning their next two wheeled trek to raise funds for prostate cancer awareness in partnership with the Simon Says non-profit.
“It’s already been brought up that since we’ve already gone to mile marker zero, we should shoot for ground zero next, maybe in 2024,’’ Chris Mull said. “It was 1,001 miles to Key West. It would be about 1,300 to New York City and the World Trade Center Memorial.’’
The Mull brothers recruited friends Dustin Littledale, Kevin Castillo, Jonathan Berry and Ken Newman to join them on their latest adventure. Work committments prevented Dustin from peddling past Tallahassee, but with the help of support crew Joe DeMartino and Ken Krempin, the men made it to Key West in 15 fun filled days, raising $15,000 for prostate cancer awareness in the process.
The Mulls’ 2020 bike ride from the Gulf of Mexico at the Al-/FL state line to Lake Erie raised over $22,000 for Simon Says.
This trip was much easier. The men stayed in relative luxury at hotels with swimming pools and jacuzzis rather than living out of a camper. They had more company with them, and they had perfect weather for all 15 days.
“Plus, except for bridges, there were no hills,’’ Chris said.
Prostate cancer awareness is very personal for Chris. He was diagnosed with prostate cancer in 2018 during a routine checkup. He said if he had waited much longer, he would have been in deep trouble, which is tragic since it is as easy as drawing blood to get checked for signs of prostate cancer. He chose an operation over radiation and that was the right choice, as his cancer was already accelerating when he went under the knife.
“It pretty much saved my life,’’ he said.
Naturally gregarious as a group anyway, the men met numerous people during the trip, including one elderly woman who made a Simon Says donation after leading the group in The Lord’s Prayer, and David Lambert, who bought the entire group a delicious breakfast and also donated $1,000 to Simon Says.
“We started Simon Says in 2014 as a way to honor my dad. There was a lot out there for boobs, but nothing for men,’’ said Jennifer Newman. “We are all about spreading awareness and finding a cure for prostate cancer, but these guys took it to another level.’’
Chris said all the roads they used were overwhelmingly bike friendly. But there were multiple issues with drivers and a few wipe-outs.
Andy said after falling behind the others for a spell he ended up drafting behind another bicyclist for about eight miles. She ended up making a donation and spreading the Simon Says word to others in her bicycle club.
“We have stories like that from every day of the trip,’’ he said. “We met wonderful, caring people who have been touched by prostate cancer every day. Hearing their stories and the support we received from them was the best part of this.’’
“Even more important than raising money was getting to share our message and our story,’’ Chris added.
“We like to drink beer and socialize, and we met people and told them our story and the next thing you know they were making donations. It was an every day occurrence,’’ Andy added. “So many families are impacted either directly or indirectly by prostate cancer. We know we touched people and that is what it was all about. That is why we were bicycling.’’
Upon reaching their final destination in Key West, the men were welcomed by a group of at least 40 friends and family.
“We had our families there and lots of Perdido Key people,’’ Chris said.
“It was pretty cool,’’ Andy added.
To donate, go to the non-profit, go to simonsaysbike.org, Venmo@SimonSaysBike or send check to Simon Says, 13422 Valerie Dr., Pensacola, FL 32507. 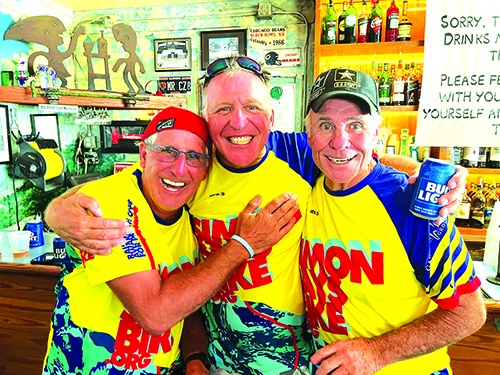