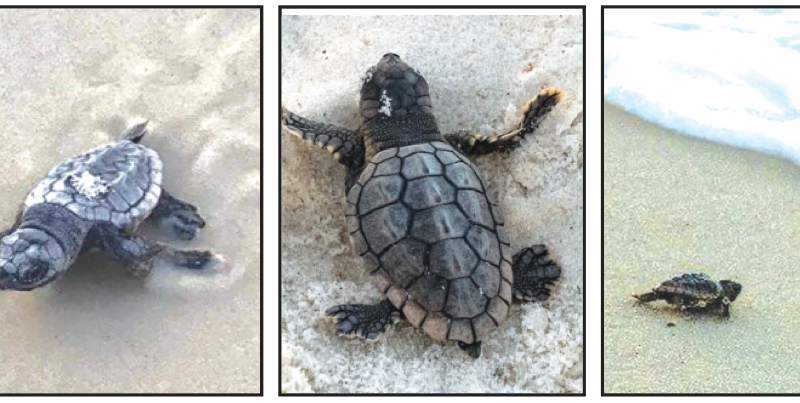 Perdido Key celebrated its first sea turtle hatch of the season during the evening of Monday, Aug. 8. Escambia County Sea Turtle Patrol volunteers discovered the hatch during routine nest checks and were able to safely recover a small number of hatchlings, but the majority of the hatchlings disoriented towards artificial lights. A full nest assessment will be conducted within the next few days and will provide an accurate count of the total number of eggs in the nest, the number of hatched eggs and other important reproductive data.
Many nests will be approaching their hatch dates during the late summer months of August and September. There are 39 nests on county portions of Pensacola Beach and Perdido Key, including a rare leatherback nest.
The first Pleasure Island turtle nest hatched during the evening of July 20. Volunteers responding to that Orange Beach hatch found the baby sea turtles wandering around the beach and in the dunes. With the help of other beach goers they rounded the babies up and helped them to the water.
“This was just one of 59 sea turtle nests found on Alabama’s beaches this nesting season, which runs from May through October,’’ said Mark Berte, Executive Director, Alabama Coastal Foundation, which oversees the Island’s Share The Beach turtle program. “We have about 500 volunteers, that starting May 1, walk our beaches from the Florida line all the way to the end of Dauphin Island. The nests are marked and have a sign with a number to call ( 1.866.732.8878) if you see hatching activity.”
If you see a nest hatching or encounter hatchlings turtles on the beach in Florida, call Escambia County Marine Resources at (850) 426-1257 or (850) 554-5869.
Nearly 60 percent of all turtle hatchlings will be disorientated by land-based lights, which can cause them to wander away from the Gulf of Mexico. Hatchlings that don’t reach the water quickly are at risk of dehydration, starvation and predation. Disoriented hatchlings can also wander into busy roads, garages and swimming pools. Permitted volunteers are trained in disoriented hatchling response and recovery, but still rely on having volunteers in the right place at the right time. Naturally, dark beaches are the best assurance for making sure hatchling turtles make it to the water where they belong.
Help protect hatchlings and turtles by remembering:
• Lights Out! Both hatchlings and nesting turtles need dark beaches to find the Gulf of Mexico. Leave the flashlights and cell phones at home or use a red flashlight when on the beach at night. Turn off beach-facing lights and close windows and curtains to keep our beaches dark.
• Leave Only Footprints! Remove all furniture and toys from the beach when you’re done for the day, including hammocks, tents, canopies, chairs, toys and sports equipment.
• If You Dig it, Fill It! Large holes, trenches and moats create dangerous obstacles for hatchling and nesting sea turtles. Avoid digging large holes on the beach and flatten sandcastles and fill in holes at the end of your day.
Pictured: Brent & Madge Williams of Wolf Bay Media found a hatchling at 6 a.m. this morning after O.B.’s first hatch and helped it to the water.