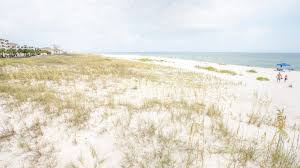 Perdido Key’s 3 county beach access points open Friday
No word yet on possible opening date for Johnson Beach
By Fran Thompson
Escambia County will reopen the county’s three public beaches on Perdido Key on May 1. But there are restrictions. And there has been no announcement as to opening dates for the popular Johnson Beach, which is part of Gulf Island National Seashore, and the Florida State Parks beaches on Perdido Key. Escambia County will officially ask respective federal and state authorities to open those beaches on Friday as well.
Just as in the beaches that will open May 1 in Orange Beach and Gulf Shores to the west, Perdido Key visitors are asked to stay in groups of 10 or less and follow six ft. social distancing guidelines. Beaches, which have been closed since March 21, will open 30 minutes before sunrise and close 30 minutes after sunset.
Escambia County District 2 Commissioner Doug Underhill has been a vocal supporter of opening up the entire Escambia County economy. “On Perdido Key we have asked the State and Feds to open theirs at the same time,’’ he said. “As of now, Johnson Beach will not be opening on Friday. Hopefully, they will be able to reverse their position in time to open Johnson Beach of Friday.’’
Underhill added that hospitalization rates in the Pensacola area are well below what was projected. “Our medical professionals are telling us that they’ve got plenty of supplies on hand to handle what happens so it’s time to get back to business,” he said.
“The board refused to pick that up. I was really disappointed,” he added. “They basically punted on it in that the governor will be probably speaking to it between now and April 30. Rather than address it all, they basically said let’s wait and see what the governor says on Thursday.’’
Board Chairman Steven Barry said health care professionals, including the CEO’s of all three Pensacola hospitals, were onboard with reopening the beaches.
“We believe, based on the public’s willingness to adhere to CDC guidelines and social distancing measures, that we can successfully open our public beaches and allow citizens to take advantage of this great resource while enjoying all beach activities,’’ Barry said.