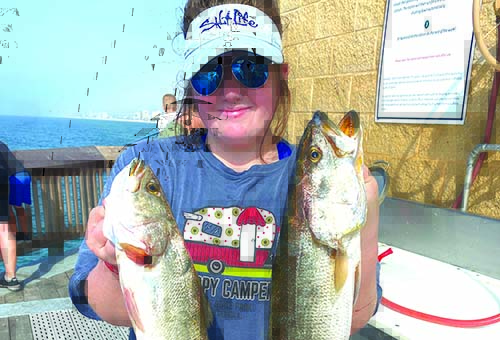 Pier & Shore Fishing Outlook
By David “The Pierpounder” Thornton
Wow, did Mother Nature throw a cruel April Fool’s prank at us with that unseasonably strong and blustery cold front the first of the month. Fortunately the effects were short-lived and temperatures have already rebounded closer to the upper 70s we are accustomed to for early April. So we hope the upcoming weather systems won’t have near as much ‘punch’, and we can get on with spring fishing.
As one would expect, the water temperature stepped back a few degrees into the middle 60s with the recent cold snap. But with warmer weather and longer days, we should see that rebound to the upper 60s where it historically should by the middle of April. A little cool wind and water sure hasn’t deterred spring breakers from enjoying a dip in the Gulf. And the fish haven’t seem to mind much either. So be sure to fish early and late in the day, or be prepared to walk to more secluded locations for uninterrupted mid day fishing.
Catches of pompano and large spawn-laden whiting (Gulf kingfish) have really ramped up along the Gulf beaches, as has participation in the fishery. Not every one is scoring limits, but many have been reported from Perdido Key to the Fort Morgan peninsula recently. And that should only get better as we move through the new moon period this fortnight. By now, most of the easily accessible ‘hot spots’ along the beach have been well marked, and well attended by hordes of surf fishers intent on a nice day at the beach followed by a fresh pompano dinner. And that is hard to beat!
Fresh dead shrimp and E-Z Flea Fishbites have been the baits of choice on the double dropper pompano rigs lately. But anglers still can’t go wrong with a ghost shrimp or live sand flea on a Carolina rig when the water is calm and clear.
Sandfleas are becoming more numerous and active in the swash zone along the beaches now. Setups may vary from long rods to reach pompano running along, or just outside the longshore sandbar, to lighter spinning outfits and even typical 7 foot medium “fresh water” combos for Carolina rigging to target whiting and pompano in the troughs and bars closer to shore.
There are still some larger black and red drum in the surfzone, so be aware of those as possible bycatch. It’s always best to keep your reels out of the sand and salt water. And to properly clean and lubricate the line roller, drag washers, spool bearings and other moving parts. A light spray from a hose, or wipe down with a wet paper towel will remove salty residue between trips. And adding line treatment like Reel Magic will prevent monofilament line from becoming brittle in the strong sunlight.
The sheepshead bite is still going strong even though we are now past peak for the spawn. But a strong showing of early run spanish mackerel has more than taken up the slack, as has the influx of pompano. And with Mobile Bay full of fresh water runoff again this year, large speckled trout are showing up in the surf from Perdido Pass to Fort Morgan. Calm mornings in April are great opportunities to walk the shoreline along the Fort Morgan peninsula to plug for speckled trout. Spanish mackerel may show up in the surfzone from time to time too. And your best chances for them are usually early morning just after sunrise or just before dark.
The Gulf State Park Pier has been a consistent producer for mackerel despite the abbreviated availability to deeper water. And the Alabama Point jetty on the west side of Perdido Pass has been producing mackerel, bluefish, sheepshead, pompano and even a few mangrove snapper. There have even been some good catches of spanish mackerel from the seawall there, though not as consistently as the other spots. As usual for early spring, most of the mackerel have been caught on Gotcha plugs and jigs. But some have been caught on the bubble rigs and some larger specimens on the x-Rap 10 according to David Lea from the pier. Anglers should always be mindful of their backcast, especially on the pier where walkers may be in close proximity and not aware of the potential danger. A great suggestion is to cast underhand when the pier is crowded to help prevent accidental hookings.
Stay safe, and enjoy our fishery, as spring 2021 rolls on!