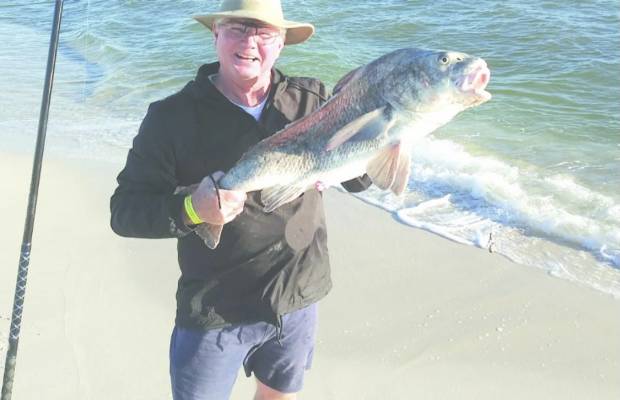 Pier & Shore Fishing Outlook
By David “The Pierpounder” Thornton
This upcoming fortnight begins and ends with NEAP tides. While the general lack of water flow can be an issue much of the year, in mid summer it seems not as much so.
The water temperature is nearing its highest of the year, the middle 80s. And that usually sparks a series of fish feeding frenzies as mass quantities of tiny fry in the form of young-of-the-year baitfish and gamefish are consumed by their older, larger fish relatives, sometimes even their own species. It’s all about eat-or-be-eaten and growing up fast in the fish world. And that opens up a LOT of possibilities for shorebound anglers in the area.
The decrease in water flow around Perdido Pass and little Lagoon Pass should help baitfish gather into larger schools, which attract larger groups of gamefish around them. So we can expect plenty of ladyfish (skipjack), blue runner (hardtail), spanish mackerel, redfish and bluefish action around baitfish schools teeming near and in the passes. Especially as we proceed toward the full moon on the 24th once the tannin stain decreases in the inshore waters.
Generally the tides will be rising through the morning, and falling through the afternoon. So plan your fishing excursions accordingly to avoid the midday heat and crowds. One way to do that is to fish at night around lighted docks piers and jetties. Lighted shore space is at a premium this time of year due to constraints mandated by the turtle people. But first and last light, or a nearly full moon can provide enough natural illumination to get gamefish to biting.
Speckled and white trout are especially adapted to feed in low light conditions. As are ladyfish, bluefish and redfish. And some mornings and evenings can provide spectacular action on the surface from these.
The June grass situation seems to have improved overall this week, and there hasn’t been much fresh Sargassum pushed onto the beaches lately either. So the early morning and late afternoon bites of bluefish and spanish mackerel have just been getting better along the beaches. Try one ounce silver spoons with a foot or so of heavy monofilament leader to protect your expensive lures from getting cut by those ultra sharp teeth. Mackerel are extremely fast and agile, and may bite the line off without even a tug detected by the angler. So pack plenty of backup lures when they are around! Bubble rigs work well too, even cast from the beach when the surf is not too rough. The splash of the bubble really calls the fish in to investigate. Ladyfish are the most common catch, but bluefish and mackerel won’t hesitate to grab the tiny fly or small tube lure offering under the bubble.
The action at the Gulf State Park Pier has been getting a little better as far as the grass and water clearing. But some things haven’t changed there. Still no word on when construction to repair the pier might begin.
Also, one day recently my long time fishing friend Tommy Nelson (from Fairhope) hooked two king mackerel from the pier and both got sharked. What a shame our destination mackerel fishery has fallen victim to an out of control shark population that anglers are excluded from tapping.
But fishing still goes on there with lotsof ladyfish and blue runner to be had, along with a smorgasbord of other species. Just often hardly enough to really key in on. Better to try and identify a pattern that might produce a variety of incidental catches. Using live shrimp (when they are available) can still glean bluefish, a speckled trout or even a few, along with some slot-sized redfish or even a pompano. In a pinch, live “finger mullet” or small LYs (sardines) cast-netted at other locations can get wary fish to bite.
The seawall at Perdido Pass is another good location for live bait. Look for good numbers of ladyfish and bluefish along with a mix of spanish mackerel on lures. But with live bait you might catch the same species along with redfish, mangrove snapper and even speckled trout. Bull minnows have been even scarcer than live shrimp, but if you can find some they can produce flounder and mangrove snapper.
No matter which venue you try, keep an eye on the sky as thundershowers can form or move in quickly.
Also watch the water for stingrays and other hazards like stinging jellyfish. Many fish have sharp spines or gill covers that can poke or slice a hand or finger. Carry needle nosed pliers or a de-hooker.