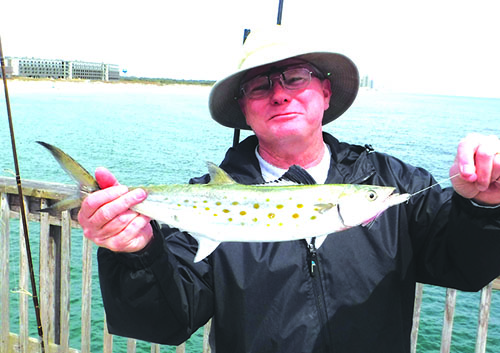 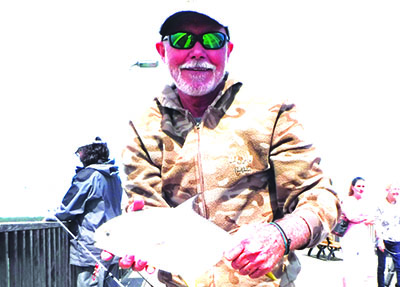 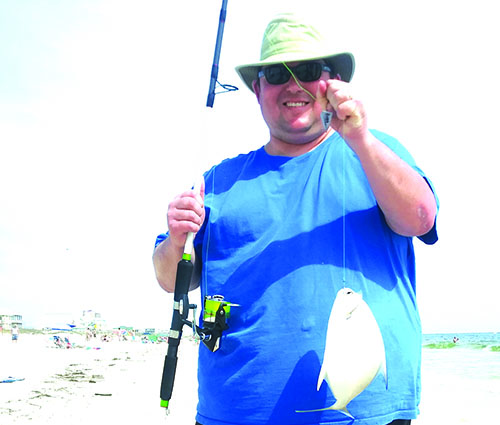 Pier & Shore Fishing Outlook
By David “The Pierpounder” Thornton
Some wonderful things are in store for fishermen in the upcoming fortnight as our weather transitions from late winter into early spring. Typically we see a general rise in air and water temperatures between storm systems to herald the new season. And with that comes the arrival of the first pelagic or migratory fish species. Spanish mackerel usually show up along the Alabama coast in mid to late March once the water is sustained in the upper 60s. No hurry to catch them though, because they will be around pretty much through the next 7 months. Spanish mackerel are great gamefish on medium and light tackle. Noted for their silvery, slashing strikes and fine table fare, they are a popular target for near shore and from shore anglers. Traditionally, tens of thousands are landed annually from the Gulf State Park Pier.
But that feat will be a bit more trying this year with only a shortened portion available. Fishers should pack patience along with their favorite lure this year, as things have changed.
Gotcha plugs and 5/8 ounce white leadhead “Looney” jigs are still the primary lures for early season spanish mackerel. These fish tend to stay deeper in the water column this time of year, perhaps because they are feeding on squid as much as small baitfish like striped sardines. Their diet varies depending on what is available, so lure size, color and style can be critical to success when they first show up. Just be sure to add a foot or so leader of heavy monofilament (30# to 50#) to help prevent being ‘cut off’ by their razor sharp teeth. Nobody ever said mackerel fishing was cheap, but it sure is fun!
Early season spanish mackerel may also be caught at times from the Alabama Point jetty and seawall at Perdido Pass. Look for an incoming tide during times when boat traffic is minimal in the channel to be most successful. Bluefish may join in the action at times, and these can be just as much fun and about as good to eat. Again, fishing deep will get you more strikes from these early season fish.
Between mackerel jiggers will be a good number of folks targeting sheepshead closer to the structures (pilings or rocks). Sheepshead should be schooled up in spawning aggregations that mill around hard structures. Even though these fish may be distracted by amorous designs, they still tend to feed on any well presented morsel put in front of their face. After all they need to keep that pleasingly plump figure. Live shrimp and/or fiddler crabs are the preferred sheepshead baits. But they also eat ghost shrimp, hermit crabs, and even crushed oysters, barnacles and clams. Medium to heavy tackle (10# to 20# class) is often employed by anglers to wrestle these scrappy fighters away from barnacle encrusted obstructions they stay near. But they can be caught on lighter tackle in certain situations for added fun.
Anglers on the State Pier closer to shore, as well as those fishing from the beaches are most likely targeting pompano. Florida pompano also tend to gather into prespawn schools in the surf zone as the water warms. Their invertebrate food sources (sand fleas, ghost shrimp, coquina clams, etc.) are becoming more active and available in water sustained above 65 degrees. Most of these folks use double drop ‘set rigs’ on bottom, baited with pieces of fresh shrimp. These may or may nor be enhanced with thumbnail-sized pieces of Fishbites or Fishgum which are colorful, flavored gel strips that slowly dissolve and leave a scent trail to the hook.
Check with the local bait and tackle shops to find out which rigs, what colors and flavors have been getting the best reviews lately, as the fishes’ preferences may change based on weather and water conditions. Generally, the rigs with brightly colored beads and floats work better in low visibility conditions. They get the attention of the fish and should direct them to your bait, specifically your hook. In calm, clear water conditions pompano may get warier, so a ‘stealthier’ presentation with a Fishfinder Rig (Carolina rig) or even freelined (live shrimp) often gets more bites then.
Other fish may bite these offerings as well. Kingfish (Gulf, Northern, and Southern), also black and red drum, and bluefish are common by-catch for anglers targeting pompano. It’s just getting better!
Pictured: Casey Guinan; David Lawrence; tehb Mullet Wrapper’s own intepid fishing guru David Thornton.