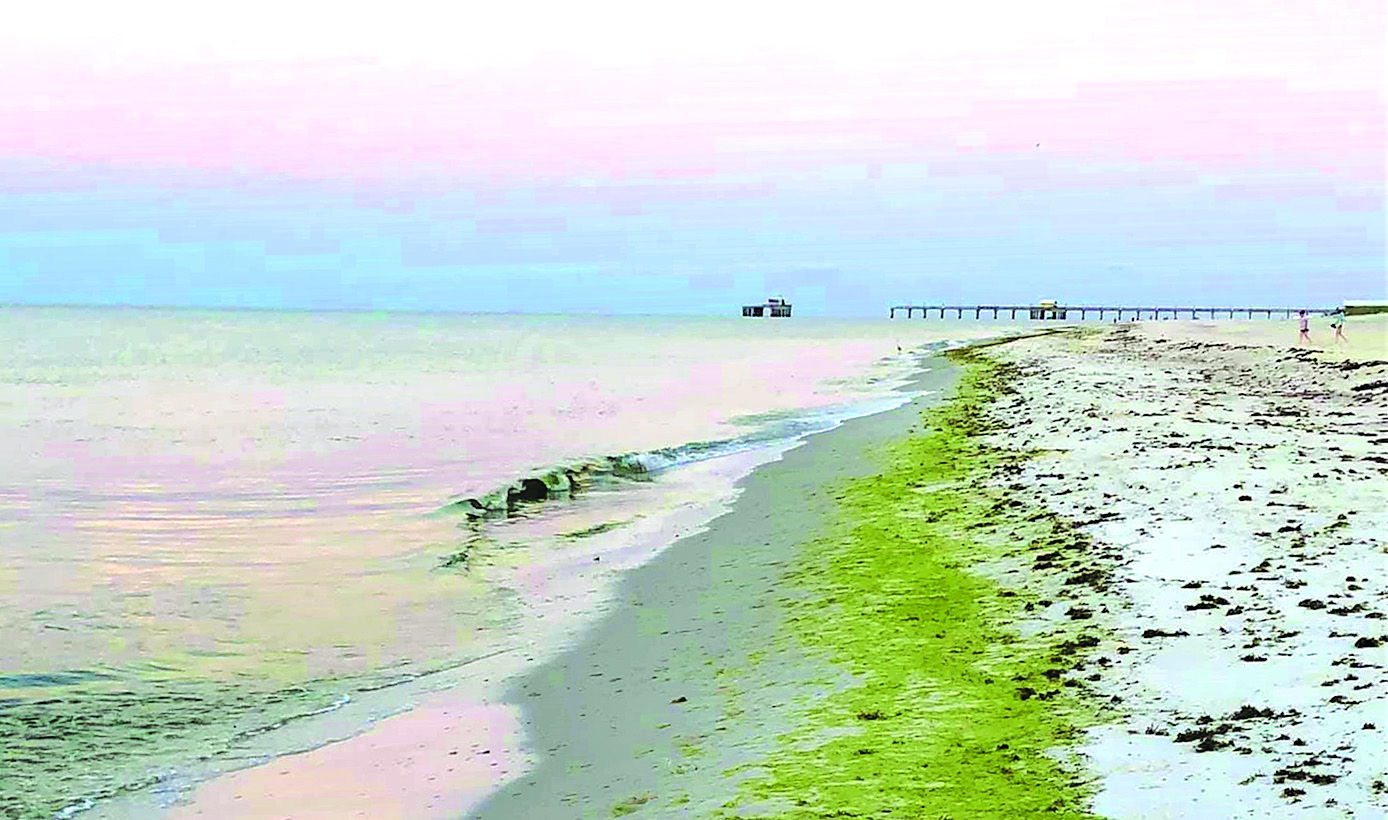 Pier & Shore Fishing Outlook
By David “The Pierpounder” Thornton
Apparently our transition into summer won’t be a tranquil one. As it seems to happen every few years in mid to late June, a tropical system is forecast to rough up the waters of the central Gulf of Mexico. Though this time it may be a blessing (of sorts), IF it will break up the bloom of “June Grass” (a free-floating form of marine green algae) which has plagued our gulf beaches for the past several weeks.
Intermittent incursions of Sargassum Grass (the light brownish floating seaweed), and the persistent presence of June Grass seems to have been the main topic of conversation by shorebound anglers, swimmers, and beach walkers recently. Too often the seaweed situation has been too much for fishermen to deal with. So they have looked elsewhere to fish like the back bay or Intracoastal Waterway.
Even if fish were present, when the wind blows, the floating green algae would often cling to their line, hook and other terminal tackle to render the presentation useless. That has too often been the case for numerous surf fishers, who found their set rigs covered in pounds of “green goo”, and left the beach frustrated. But all things are transient along the coast, and this too shall pass sooner or later.
From day to day there have been areas where the seaweed was not as thick which allowed fishermen to test the waters. Such was the case Saturday June 5th at the Gulf State Park Pavilion, when the park offered a free Kids Surf Fishing Clinic. Practically all the kids caught fish. There was a decent whiting bite (Gulf kingfish), and some were really nice sized. They also caught ladyfish (skipjack), blue runner (hardtail), remora (sharksucker), rays, and small sharks. There were big smiles all around! Event coordinator, Cindy Langston deemed it a success, and vowed it would be repeated in the future. The volunteers echoed that sentiment, so clinics like this will surely to be something to look for in the future. These youngsters are the future of surf fishing!
What we can ordinarily expect this time of year is for the water temperature to continue rising to the middle 80s by the end of June. That is when the truly “tropical” aspects of our humid sub-tropical climate usually kick in. Isolated, scattered, or even numerous early morning coastal showers and thundershowers are the norm depending on the direction and amount of wind. These are usually followed by a few hours of quiet skies but building heat in the middle of the day. Then the seabreeze builds, and the storms reform over inland areas through the afternoon and evening.
Occasionally, these inland storms may be intense enough to send an out flow boundary (“gust front”) southward toward the coast late in the afternoon or early evening. The low, dark, rolling clouds are accompanied by a refreshingly welcome cool north wind. But they are often also accompanied by lightning. A proven coastal killer that on average takes about half as many lives as rip currents. So be wary!
With the seaweed being such a detriment to beach fishing recently, angling attention has been high at the Gulf State Park Pier. Most are targeting spanish mackerel with Bubble rigs and small plugs, but ladyfish and blue runners have been much more common. Still, some nice spanish mackerel have been landed. Schools of “bull” redfish and jack crevelle made a few guest appearances at the pier recently. And even a few king mackerel have been reportedly hooked, though no catches have been documented.
The seawall and jetty at Alabama Point have been inconsistent producers of spanish mackerel as well. Mainly because of the seaweed and enormous amount of boat traffic (especially on weekends). More ladyfish and undersized mangrove snapper are landed there than anything else. But that is standard for mid June along the Bama Coast. Try to fish early and late, pack plenty of water, sunscreen and patience, and keep an eye on the weather.
Pictured: June grass has been a problemic issue for both fishers and swimmers at local beaches (photo by Milton Rittelmeyer)

Alabama state waters and federal waters are will remain open Friday through Monday until the private angler quota is projected to be met.
Weekends are defined as 12:01 a.m. Friday through 11:59 p.m. Monday. The daily bag limit will be two red snapper per person, per day with a minimum size limit of 16 inches total length.
Anglers over the age of 16 must have an Alabama saltwater fishing license, and even Alabama residents 65 or older and lifetime saltwater license holder must have a current saltwater angler registration.
The saltwater angler registration is free and available at outdooralabama.com.
These dates only apply to anglers fishing from recreational vessels and state-licensed Alabama commercial party boats that do not hold federal for-hire fishing permits. Federally permitted for-hire vessels have their own 63-day season that continues through Aug. 2.