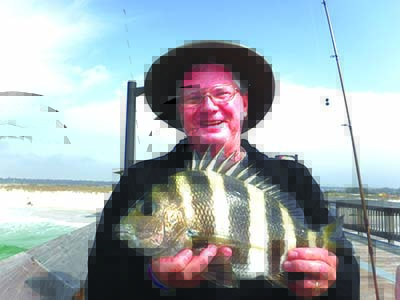 Well, it appears our bipolar weather pattern will persist at least through most of the upcoming fortnight. This despite predictions from “Gus”, the Gulf Shores Ghost Shrimp (our weather prognosticating arthropod) who did not see his shadow on February 2nd. In fact at the time we were subject to a rather strong onshore wind flow for several days that pushed wave heights well over 10 feet. Not only did that shut down any semblance of surf fishing, but the prolonged period of huge waves and rip currents likely reshaped the sandbars of the surf zone. There was not much of a bite to be interrupted prior to the storm anyway, but now might be a good time to reconnoiter your favorite surf fishing spots.
Since the water temperature seems to have bottomed out in the upper 50s, we might even see a slight rise into the low 60s along the beaches as the weather stabilizes into a mid-winter pattern for a couple of weeks. Let’s hope that brings an influx of fish to the Gulf State Park Pier and Gulf beaches which have been largely uninhabited by fish through much of January while water temperatures declined.
Recent catch reports in our area have consisted mostly of isolated large black and red drum, and some sheepshead from Perdido Pass and back bay locations. The beaches were mostly devoid of fish, with practically no pompano, and only a few scattered whiting. Meanwhile, the spaghetti bryozoan was making its widespread presence infamously known to anglers. Perhaps this most recent significant storm will clear out the bryozoan from the surfzone, and ‘stir the pot’ enough to bring some fish back? We will have to see, but at least the tide flow looks good through most of this period. Even the next NEAP tide is limited to just one day (February 20th). A winter tidal pattern will continue as most days experience lowest water during the late morning hours, with increasing water levels into an evening hour high tide. This may bode well for late afternoon surf and pier fishing as warmer and slightly deeper water pushes closer to shore then. This favorable fishing pattern could even last past sundown on the days around the full moon of February 16th. Plus each daylight period is about 12 hours now.
With pompano pretty much unavailable until the water temperature rises back into the middle 60s, we can expect “whiting” (Gulf kingfish) to take most of the angling pressure from the beaches and pier. Ghost shrimp are by far the best bait for them, though live or even fresh dead shrimp may work at times too. But the scent of a ‘juicy’ ghost shrimp seems to really help get lethargic fish to bite in cooler waters. Even the occasional large black drum, redfish or sheepshead won’t often pass up ghost shrimp.
Products like Magic Thread and Miracle Thread are a ‘must have’ addition to the tackle bag for anglers using ghost shrimp, to help keep them on the hook when casting. Otherwise the soft bait is easily torn from the hook during the casting process. Simply tie an 8 or 9 inch piece of the elastic thread through the eye of your hook with a couple of half-hitches. Then thread the hook up through the ghost shrimp and wrap each end of the thread around it several times to secure it in place. The thin elastic thread does not deter the fish from biting, and it is quickly biodegradable if lost.
Though sheepshead have been mostly MIA at the Gulf State Park Pier, they make up a fair percentage of the angling effort anyway. This is the time of year they usually begin to move into the Gulf to form pre-spawn aggregations. Their affinity to amass near hard structures in the Gulf during the late winter is renown, as is their finicky nature of not biting a hook. But the rewards of some tasty white meat fillets is more than enough incentive for anglers to put in many hours in pursuit of them. The seawall and jetties at Perdido Pass will likely be the epicenter of this effort, but many still linger in the back bays around piling and seawalls with deeper water nearby.
Live shrimp held in place on a Carolina rig (Fishfinder) is the most common terminal setup to target sheepshead, or other inshore species. But it is not always the best depending on conditions encountered. A single dropper rig is very effective for vertical fishing from a seawall, dock or pier because the bait above the weight offers more sensitivity for the light bite of a sheepshead. A bell-shaped sinker (bass casting) is well suited for these rigs especially fishing over submerged rip-rap like at Perdido Pass seawall. The rounded sinker is much less likely to snag on the rocks or barnacles than the straight edges of a pyramid sinker. They come in a wider variety of weight sizes too (quarter and eighth ounce), which gives the angler better control over the presentation. If the weight does get snagged on a rock, it can often be freed just by alternately dropping slack line and wiggling the rod tip.
In a slow current a free line presentation is often more effective, and certainly covers more water faster. Splitshot weights (one or two) affixed on the line about a foot or so above the hook are very effective for drifting live shrimp or fiddler crabs into the strike zone.
Though an increasing number of sheepshead anglers like the Bottom Sweeper (“Knocker”) and Free-Swinging style jigs. These are designed to move flat along the bottom while keeping the hook point facing up baited with a fiddler crab, or shrimp. It is a great presentation method for sheepshead staging on a sandy bottom, and offers great sensitivity of the light bite of a sheepshead.