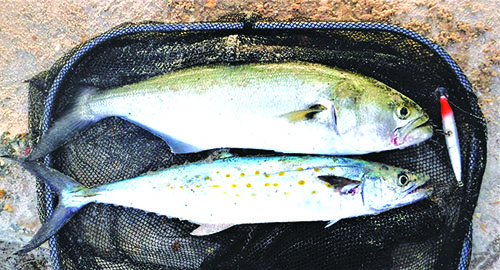 Several challenges await late summer from-shore anglers in our area. But a myriad of options and species are still available to bend the rod and grace the plate of those anglers willing to put in a little time (and sweat). Avoiding the searing heat of midday is the most obvious way to be successful. Even the fish have adapted to use the shadows of piers, bridges and pilings to avoid being eaten while looking for a meal themselves. Predatory species like speckled trout, redfish, and bluefish often hide in the shadows near the pier or jetty, or even under the bridges. And others like mangrove snapper and flounder are often found on the shadowy side of piling and rocks, waiting to ambush hapless baitfish.
The current tide cycle (fortnight) begins with a NEAP tide period August 25 – 27. So, we can expect much less water movement in the passes at these times. And very little change in sea level along the beaches these days, barring any strong wind events. NEAP tides do not usually affect the bite at the Gulf State Park Pier so much. Especially for pelagic species like spanish mackerel and jacks which are more attuned to the availability of food nearby.
This time of year, two to three inch long young-of-the-year Scaled and False herring (called LYs) abound in the surfzone and passes. They are the primary food source for a variety of fish species, eager to gobble up as many of these as they can in anticipation of ‘leaner’ times ahead. Most of the time you can locate large schools of the small LYs, the larger gamefish won’t be far away. It is usually just a matter of time before the conditions in the water and in the sky result in a bonafide ‘chew down’. The trick is when to be there, and be prepared.
The hours around dawn and dusk are often quite productive for fishermen to take advantage of these transient feeding frenzies, especially when using artificial lures. But there may be times during the day when a tide change, or shift in the wind or amount of cloud cover can spur a good bite as well, though not always with lures. Savvy anglers know how to anticipate these events and be in a position to take advantage of the situation.
Most who use live bait will catch some prior to a feeding event either in a 3/8 inch mesh castnet, or red ribbon rig. A 5 gallon bucket with a battery powered aerator can keep several dozen baitfish alive for most of the day. Keeping it covered with a towel will help keep the water temperature lower in the bucket, and prevent stealthy blue herons from stealing your bait.
A properly hooked baitfish does most of the work for the angler. That cuts down on the amount of exertion and number of casts the angler has to make in the heat. An important variable for ‘old guys’ like me ;-).
There are several ways to hook an LY, and the best depends on how you are fishing it. These methods may be used with or without a small styrofoam float. Hook an LY through the clear spot above the ‘nose’ if you expect to cast it repeatedly and retrieve in a current. Hooked through the back, the baitfish tends to swim away from the tension. But hooking an LY underneath (through the ventral fins) is a good compromise. This encourages the baitfish to swim down in the water column, plus any tension on the line makes the silver sided LY turn on it’s side and struggle more to remain upright. The flashing and struggling baitfish looks like an easy meal to nearby predators.
What kind of hook to use, and how to hook the bait depends on the intended species. While 2X #6 or #8 treble hooks work well for trout and slot redfish, the short shank hook is more easily bitten off by toothy bluefish and spanish mackerel. So when they are around, the angler should use a leader made of heavy monofilament (30# to 60#), or light single strand wire. Long shank single hooks (like a #4 or #2 Tru-turn) work well too. And may even be more effective and less visible to the fish which often strike these baits with abandon. Hopefully, these tips will help you from getting overheated, and catch more fish in the process!
We have been quite fortunate to avoid the worst from the tropical season so far. But the busiest part of the hurricane season (historically) is upon us. So while we have a lot to be thankful for, there is a lot more to pray for. Stay safe and bowed up!
Pictured: A nice catch on a typical LY rig.