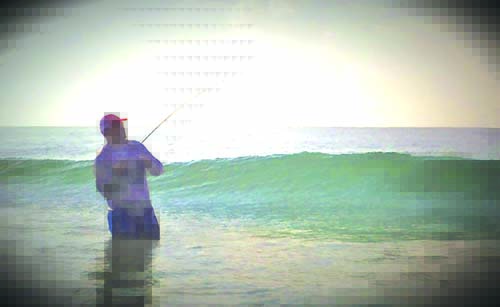 Pier & Shore Fishing Outlook
By David “The Pierpounder” Thornton
The end of our previous fortnight was dominated by the inclement weather related to hurricane Ida and its aftermath. Despite the intense fury of this hurricane, it would seem our stretch of the coast made out comparatively light to the extensive damage and flooding folks in Louisiana and beyond have experienced. May their misery soon be rectified!
Tropical systems of any strength are never easy to predict, and we are passing through the historic peak of the Atlantic Hurricane Season (September 10th).
Fortunately, there doesn’t appear any viable serious threats on the horizon. But as often is the case this time of year, some of the long range computer models keep hinting at another bout of tropical weather for the northern Gulf Coast. Thank goodness most of these computer generated phantom storms never even materialize, but as it is said “even a broken clock is right twice a day.” So, it pays to remain vigilant during hurricane season by watching for updates from the National Hurricane Center, which gives us THE most accurate information about possible storms, (nhc.noaa.gov)
The slow rate of clearing for the coastal waters seems to be a pressing concern for area anglers since “Ida” not only stirred huge swells, but dropped a lot of rain over the region.
The Perdido River was in flood at the first of the month. And all that fresh water will take a while to work its way through Perdido Pass and be mixed into the Gulf of Mexico. Little Lagoon may also be discharging a good bit of dingy or tannin waters through the days ahead. It is natural for fresh water systems along the gulf coast (east of Mobile Bay) to carry a high load of dissolved fulvic or humic acid after heavy rains.
Tannin, as it is referred to is the result of rainwater filtering through slowly decaying leaves and tree bark on the ground. Much like the way tea leaves discolor water in a cup, only this is a much larger cup. This surface water runoff is often the color of tea (dark to light brown) once the sediments settle out. But it may discolor the emerald green waters along the edge of the Gulf of Mexico near the passes as the tide flows out. Prevailing winds and currents from the east or west can help push this outflow down the beach in one direction or the other for miles. The boundary of this dark colored freshwater current interface with the saltier green Gulf waters is often referred to as a tide line.
Fishing may be better, or worse on one side of a tideline or the other. Mackerel and pompano in particular are not fond of fresher water, and may bunch up ahead of the movement of a tideline. Consequently, early mornings or late afternoons may be better times to concentrate on these species from the beach or the pier. Bluefish and ladyfish don’t seem to mind so much about the salinity of the water. And redfish or mangrove snapper care even less. This should give anglers a better idea of which species to concentrate on, and what tactics to use based on the water color, location, and time of day.
Topwater plugs may get you in on a good bit of action on calm mornings. While subsurface suspending plugs or even spoons and jigs usually get more attention from hungry fish once the sun gets up.
Bottom fishing can be productive for whiting along the beach sandbars with small pieces of shrimp, if the hardhead catfish allow. And redfish, especially the “bulls” near Fort Morgan Point can be caught on large dead or live bait. Of course smaller live baits like baby LYs, ‘finger mullet’, bull minnows, or shrimp work great on a wide variety of species (like reds, trout flounder and mangrove snapper) in many situations and locations. Just be sure you tackle is adequate, but not ‘over-powering’ for the job!
The Gulf State Park Pier fared well through the 15 to 18 foot swells that Ida threw at it. There were just a few floor panels displaced from the wave action. But the main waterline was broken near the beach under the pier house. Though that was soon repaired, and the pier is again fully operational 24/7. Now the pier house, tackle shop, and restaurant are currently open (6 am to 10 pm).
The seawall at Alabama Point (west) was breached by swells two days in row from Ida. Besides flooding the parking lot, a good bit of sand over washed the road near the bridge and the wind pushed over the chain link fence. There doesn’t seem to be much additional damage to that area though, which is slated to be repaired by the City of Orange Beach beginning late this year. This facility has been sorely missed!
Alabama anglers should remember their fishing license must be renewed after September 1. Even if over 65, you must sign into the National Saltwater Registry (it’s FREE), and obtain a Reef Fishing Endorsement ($10) if you plan on retaining any mangrove snapper (which are most plentiful now). Hoping we get to enjoy the end of summer without any more interruptions this year! Pictured: Andy Perigno casting into the surf near the Gulf State Park Fishing Pier.