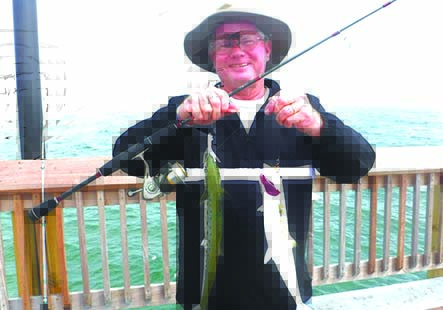 It seems we are finally getting in on some classic fall weather and fishing along the Gulf Coast. Though that transition had been temporarily slowed by slightly warmer than average water temperatures in the Gulf (above 80). But that should soon change as the days are getting noticeably shorter, and the expected cooler air will aid the decline of water temperature. Though we are not yet totally in the clear from the threat of tropical activity, the trend seems to be that the season is rapidly winding down. And the sooner, the better! It is generally expected that once the tropical storm season is over, the contract to repair the Gulf State Park Pier (shortened by hurricane “Sally” in September of 2020) will be let out, so work may get underway. Still no official report of when that will happen, but we are getting closer. Again, the sooner the better! 😉
With luck, the current dry spell just might continue, as October is historically our driest month. After enduring a very rainy summer, we could sure use a break to move fishing into ‘full fall mode’. The warmer water has allowed ladyfish and other jack species to linger in the surf zone lately. And there are plenty of reports and sighting of marauding schools of giant jack crevalle in the 20+ pound range. These fish are a challenge for any spinning tackle, especially when the angler is on the beach or the pier. Even their ‘younglings’ in the surf can pull surprisingly hard for their size. But when full grown, their power is exponentially stronger. I leave the ‘bruiser’ jacks to younger anglers with healthier backs!
Bluefish are still running well along the beaches, passes, and at the Gulf State Park Pier, where they are feasting on the small Scaled herring (LYs). These three inch long juvenile forage fish make great bait for the highly competitive bluefish patrolling in spawning aggregations up and down the beach.
Some of these blues exceed three pounds, which is pretty large by Gulf Coast standards. They are not only great gamefish, but fine table fare when grilled, smoked or pan-sauteed. Spanish mackerel have been in the fray at times as well, since they are ‘fattening up’ for their seasonal migration to south Florida. Though lately, anglers on the pier have been doing best with spanish mackerel by using the Bubble rigs. Sharks seem to always be at the pier, and are nuisances to anglers intent on catching mackerel.
It has been my privilege to guide the Angler Academy classes hosted by the Gulf State Park Pier this fall. What a great opportunity to meet dozens of fine folks from all over the country, including Alaska! Most are fishing in saltwater for the first time, and some even fishing for the first time. To see the joy in their eyes of a ‘first catch’ helps me appreciate our fine fishery (and facilities) we are blessed with, all the more. We should cherish this always, and be grateful to The Creator for the opportunity to share it.
The ‘bull’ redfish run at Fort Morgan seems to have eased off a bit during the recent warm spell, but should resume at an even faster pace once the water begins to cool again, and we move away from the NEAP tide cycle at the start of this fortnight.
Hopefully that, along with the waning moon will aid the early morning bite to pick up near the Point. It is a long walk out to the Point (about a mile from the parking lot), but often worth it, to get the chance to tangle with multiple redfish in the 20 pound class.
‘Slot-sized’ redfish numbers in the surf and from the pier have been a bit low so far this month. But there are still decent numbers of speckled trout in the surf, perhaps due to the warmer and fresher than average Gulf water and a plentiful bait supply.
The tannin water influx from Perdido Bay and Little Lagoon has only gradually abated. So we are hopeful the Gulf salinity should improve as long as drier weather prevails. Late October is when we usually see the most slot reds caught in the surf zone. It is also the best time of the year to find ‘keeper’ mangrove snapper (12” Total Length in Alabama) from shore based venues. As always, Perdido Pass seawall and jetties are ‘the HOT spot’, but some legal mangroves have been caught at Little Lagoon Pass and at the State Pier.
As well, some nice whiting have been caught from the pier and in the surf lately from Perdido Key to near Fort Morgan Point. Most are Gulf kingfish, but a few Northern and Southern kingfish have been mixed in as well.
Lately, flounder and pompano have been fairly numerous in the surf and at the pier, though sometimes catching a ‘legal-sized’ fish can be a bigger challenge, as has been finding good live bait. Demand has been high along with the recent influx of fall vacationers.
Still, savvy anglers who are persistent have been catching enough keepers to make it worth their time.