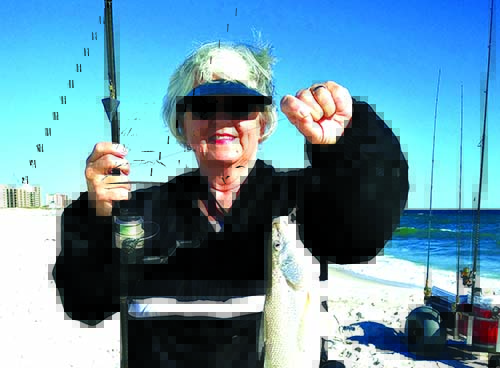 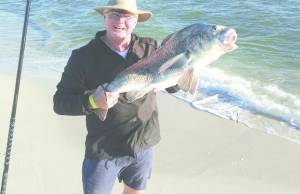 Well, our previous fortnight was again plagued by dingy waters, rough seas, and high winds. But let’s hope the future pans out a bit better in our favor. The coastal water temperature is set to tumble through the middle to low 70s during this period, as successive cold fronts bring a distinctive chill to the area on northerly winds.
These will coincide with midday low tides, which lends toward early mornings and late afternoons probably being the best times to catch the fish feeding. The few coastal pelagic species (jack and mackerels) still hanging around, will likely catch the next front to head south into Florida for the winter as the water cools.
The good news is, that opens up bottom rig fishing for our resident drum species like red and black drum, croaker, and whiting, which are tolerant of cooler water. We can add pompano, bluefish and sheepshead into the mix, along with the obvious ‘scourges’ like catfish and rays to round out the list of what shore anglers might expect to encounter through the middle of the month.
Bull redfish should still be a high priority prospect for trophy minded surf anglers, especially at the Point of Fort Morgan peninsula. Outgoing tides are usually better for reds to feed there as they await any mullet, menhaden or other small finfish, shrimp and crabs to be swept out of the cooler, shallow bay.
A similar situation sets up at Perdido Pass. And even Little Lagoon Pass at times may hold a good concentration of reds feeding near the mouth. In times past, the Gulf State Park Pier saw good numbers of large redfish landed this month. But in its shortened state, we probably won’t see as much of that.
What pier anglers can look forward to is increasing catches of “whiting” (Gulf kingfish), along with more sheepshead. There could be good numbers of large croaker at times, and even some pompano, redfish and bluefish around, and perhaps even a few speckled trout and flounder. Though the season for flounder is closed the whole month of November in Alabama, and remains closed in Florida waters too. Still, there are opportunities for some catch and release of these fine gamefish. Live shrimp is a more popular and productive bait now, as the numbers of pinfish and other pesky ‘shrimp stealers’ thin out. When the water is clear, use a small hook and just enough weight (splitshot) to encourage the shrimp to swim towards the bottom. That’s where most of the predators will be, with the notable exception of sheepshead which may be suspended on the pilings. A similar presentation works well along the seawall at Alabama Point, and from the rock jetties where there may still be some mangrove snapper as well. Sheepshead become the primary target species now, using live shrimp and/or fiddler crabs, as the numbers of bait stealing pinfish, pigfish, and such generally decrease in the cooling Gulf waters.
Surf fishers can better target pompano now, though they will usually catch more kingfish (whiting) than anything else. Nothing wrong with that really, as these small drum are frisky fighters and fine table fare. This is a good time to use the double drop pompano rigs baited with fresh cut shrimp perhaps tipped with Fishbites or Fishgum. These synthetic baits slowly dissolve on the hook, releasing a scent trail to your hook.
They come in a variety of flavors and colors, and every angler seems to have their preferences. Though which works best often varies from day to day (as do fishing conditions) in my observation. But fresh bait is a key to consistent success, even if you have to find or kill it yourself. Beach ghost shrimp become the number one prey item on the menu of these surf dwelling species as the water get cooler. These fragile baits are easily cast off, but can be better kept on the hook with a piece of Magic Thread (or Miracle Thread). It looks like elastic dental floss, and is tied to the hook and wrapped around the bait several times to secure it to the hook. VERY effective at times!
Selecting the exact presentation and location to find feeding fish becomes more critical as the water gets cooler.
Remember always that fish are cold blooded, and respond in kind to their environment. Finding a good feeding spot to set your baits will ensure more fish get a look at it, and you get more action. Sandbar points, breaks and drop-offs are prime real estate in the surf zone. But keep in mind these features are transient, and can change drastically with the next storm. Wind and waves are always shaping and reshaping the beach and these sandbars. So checking around for alternative sites to fish (relocate) can often make, or save the day for you. Good luck and good fishing!
Pictured: Susan Thornton with a nice whiting destined for a fish fry.