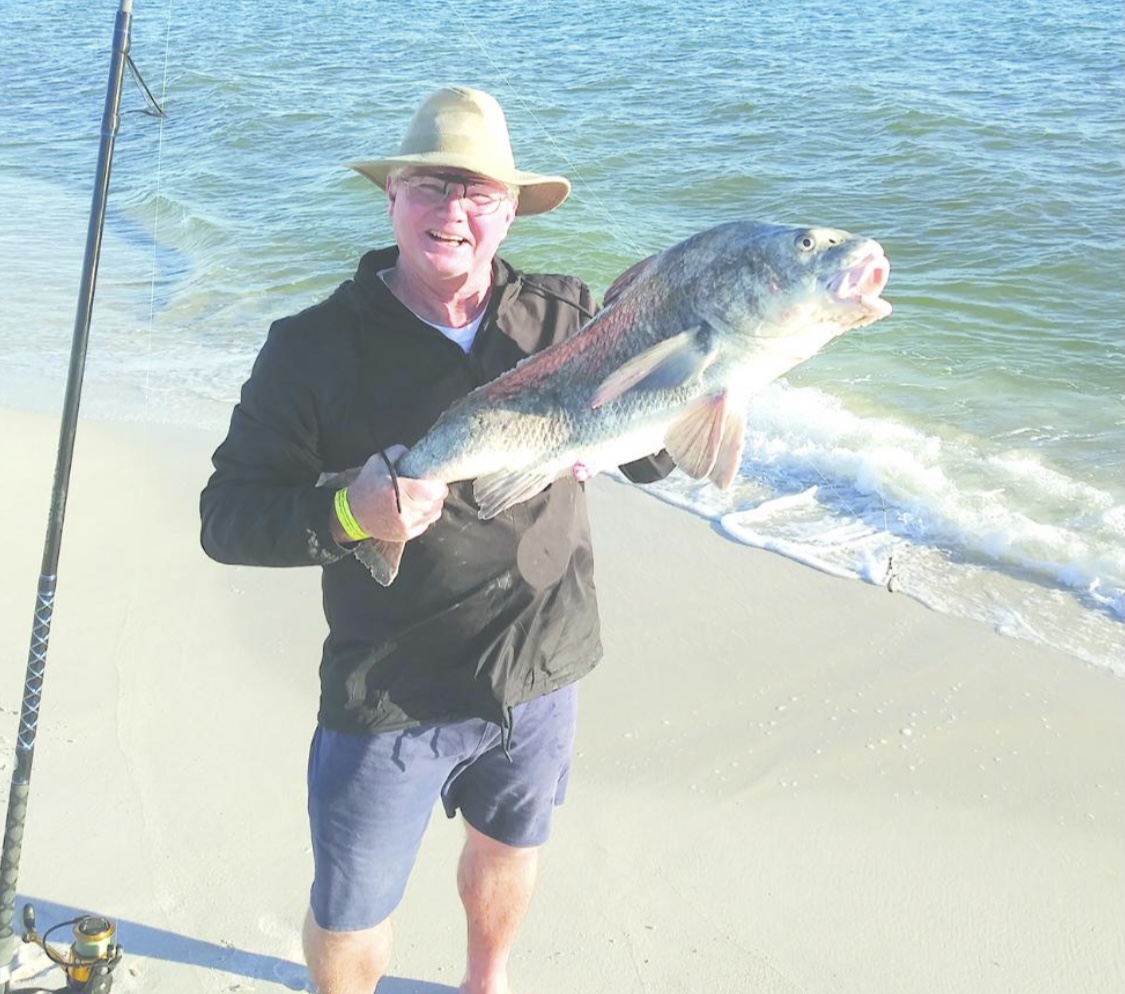 It appears more of this typical fall-like weather pattern is in store for the area through the rest of the month. And the fishing has been right about on historical cue as water temperatures only grudgingly decrease through the lower 70s. A series of mostly dry fronts, consistent with the La Nina pattern is forecast to continue through the fall. The Gulf was mostly calm during the past fortnight. Maybe too calm for consistent catches of pompano and “bull” redfish, though they have been in the surf zone.
Whiting (Gulf and Northern kingfish) numbers and sizes have been increasing as the water has cooled. And the near shore sandbar structures provide a lot of locations for schools of these smaller drumfish to hang out, by providing them both food and shelter. When the Gulf is fairly calm, try close to shore for the numerous 8” to 12” whiting using light spinning tackle (4 to 8 pound class) with just an inch long piece of fresh shrimp on a Carolina rig with a ¼ to ½ ounce egg weight. Sometimes adding a small piece of brightly colored synthetic bait, like Fishbites, Fishgum or Gulp will increase the amount of “soak time” while waiting for a bite. Though not regulated in Alabama or Florida, whiting are easily depleted by localized over fishing. So most anglers abide by the “10 by 10 rule”. That is 10 whiting over 10 inches per angler per day. This helps assure there will continue to be plenty of the feisty and tasty panfish around for everyone, and for years to come.
Once the wind and waves pick up, increase the sinker size up to an ounce egg weight, or switch to a single drop rig with a one to two ounce pyramid sinker. I like to use a #4 or #6 kahle hook on these rigs, depending on the size of the fish encountered. So don’t be surprised if you hook an occasional pompano, redfish or drum in these same locations. They can be a real test on ultralight tackle, and a LOT of fun!
Anglers fishing near the point at Fort Morgan have scored some impressive, though inconsistent catches of “bull” redfish this month. A strong running outgoing tide seems to bode best for this type of fishing, especially when accompanied by a spell of rough weather, or in the dark of night. Typically anglers targeting bull reds bait up with fist-sized chunks of fresh cut fish (mullet or menhaden). These are fished on the bottom using 10 to 12 feet rods (or longer), in the medium heavy or heavy class (20# to 40# line).
Weights vary from three to eight ounce pyramid or sputnik type in order to keep the bait in place for long periods between bites, despite the strong currents or winds. A growing angling contingent roams the area throwing large swim baits, jigs, spoons or plugs on medium to medium heavy rated spinning tackle in order to entice the marauding redfish to bite. It is quite a workout to walk a mile in the sand, make repeated casts and retrieves with fairly heavy tackle, then fight a redfish (or several) over 20 pounds, only to release it and walk back. It is a lot of fun though!
Less adventurous or experienced anglers often end up just staking out a piece of beach front and soaking several baits on bottom in hopes a school will happen by, or perhaps just to pass the time. Selecting “their spot” may entail a long walk along the beach with a cart to reach a location likely to attract feeding fish, or be as simple as walking out directly in front of their rental or parking venue.
And a lot of folks end up at the Gulf State Park Pier. The pier is undoubtedly the easiest venue to fish, subsequently it is often the most crowded, especially when fish are biting. That is why the pier has a “only one rod in use” rule. It gives each angler opportunities at the same fish. Presentation and cooperation are helpful skills to be successful on the pier, so pack your patience along with your tackle. But the spirit of fishing camaraderie is what brings folks from all over the country back to the pier year after year. They share stories and tips and tackle along with the rail space and even some fish or doughnuts and coffee. Always a good time to be had at the pier, even if the fish are not there.
We can expect to see more sheepshead around hard structures in the Gulf and passes. So places like Perdido Pass and the Gulf State Park Pier should soon see more catches of the sneaky bait thieves. Try fiddler crabs, small live shrimp or ghost shrimp on light to medium class tackle with a small but stout hook to entice these wary gamefish. The payoff is some tasty, flaky white meat fillets.