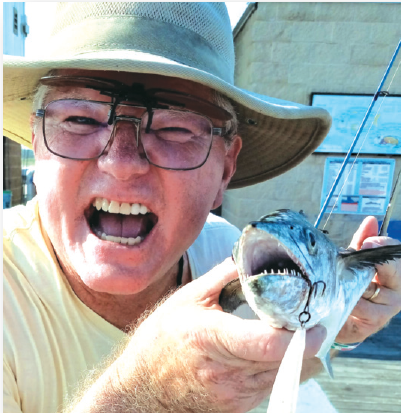 Sizzling summer like weather sure took over during the past fortnight when we had near record high air temperatures around 100 for several days. But a more typical pattern of scattered to widespread diurnal thundershowers has since brought things back closer to ‘normal’ as we enter into astronomical summertime through early July.
Fishing responds to these conditions with a usual assortment and abundance of summer fish species that makes the Chamber of Commerce boast the possibilities. Literally the largest of these are tarpon (the official Alabama salt water gamefish) which are already showing up in growing numbers around the abbreviated Gulf State Park Pier.
Watch the water along and south of the longshore sandbar on the east side of the pier for schools of migrating tarpon. Most anglers nowadays throw 3 to 4 ounce soft plastic swimbaits on heavy class spinning combos to elicit a tarpon bite. But they will eat large plugs too, and live baits like Scaled herring (called “LYs”). Also, large jack crevalle, bull redfish and king mackerel made periodic appearances while the water was calm and clear, and even pelagic mahi (dolphinfish) have shown up a few times recently. Of course all this action will be interrupted by occasional bouts of thundershowers with brisk winds.
But at least organized tropical systems are still relatively rare this time of year. Spanish mackerel will show up at the pier from time to time along with plenty of ladyfish (“skipjack”) and blue runner (“hardtail”). All these are often caught on 7/8 ounce Gotcha plugs, though they bite a wide variety of artificial lures and live baits. Large spadefish are still around though they have not been as cooperative in the clearer water. Some anglers (with live bait) have been focusing on speckled trout hanging around the shallow end of the pier early and late in the day. Also a few ‘keeper’ flounder and slot-sized redfish have been caught there recently too.
Surf fishing action has been a bit ‘spottier’ for pompano though they are still regular catches from the beaches. Some anglers down Fort Morgan Road report doing better using beach ghost shrimp. Targeting pompano in calm, clear water with light tackle and a stealthy Carolina Rig with a live ghost shrimp or mole crab (“sandflea”) often outproduces the standard double-drop Pompano float rigs with shrimp and/or Fishbites/Fishgum.
Of course, you never know what a fish is thinking, so it’s a good idea to try different setups, baits and distance presentations until you can find a pattern that produces. Another option is to wade and cast pompano jigs or “Silly Willy” rigs to tempt the always mobile pompano. And keep a light spinning combo nearby rigged with a one ounce spoon or Bubble Rig to cast at marauding spanish mackerel or ladyfish which often school near shore in the mornings and evenings. Meanwhile, speckled trout can still be caught on medium class spinning tackle while walking beaches to the west, on most of the usual lures. Plus brutish jack crevalle can be targeted with larger poppers and plugs on heavier spinning tackle.
Numerous hardhead catfish and stingrays have made pests of themselves lately, but at least the Sargassum grass has not been as much of a recent issue for surf fishers.
The Little Lagoon Pass, Perdido Pass seawall and Alabama Point (west) jetty sport good action at times too. The morning incoming tides can be especially productive for Spanish mackerel, bluefish and such. Look for large scale bait movements at dawn to signal feeding activity through the morning.
The outgoing tide during the afternoon/evening hours tends to favor action for ladyfish, bluefish and redfish, but some ‘keeper’ mangrove snapper are showing up, so be sure you have a $10 Reef Fish Endorsement license to legally target and retain them. Also, “anglers must use non-stainless steel circle hooks when fishing for, retaining, possessing or landing gulf reef fish when using natural bait.” The NEAP tide period (July 6-7) and the Full Moon (July 13th) will likely have most profound influences on all coastal fishing through this fortnight as long as those conditions are not overshadowed widespread thundershowers and winds. Good luck, stay cool and safe!