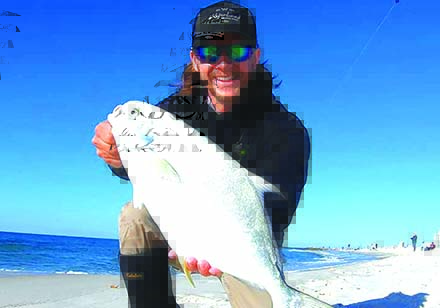 Persistent winds through the past fortnight certainly confounded fishing efforts along the coast. Rough and dingy water conditions conspired to thwart a real ‘breakout’ spring bite. Surf and pier anglers struggled against the adverse conditions to catch primarily sheepshead, pompano and whiting.
That trend however, seems to be giving way to a more pleasant weather pattern through this period. A bit less wind and clearer water would be nice. The water temperature has been up and down a couple of degrees either side of 70. Once that sustains above 70, fishing should generally improve with more typical catches of spanish mackerel, pompano and such.
Although the sheepshead bite is winding down, pompano and spanish mackerel should be picking up. Also, speckled trout should be showing up in the surf, especially west of Little Lagoon Pass. Dredging continues there, which may detrimentally affect the bite on ‘work days’. But the pass really needs to be deepened periodically in order to help the Lagoon maintain a healthy water exchange overall.
On a positive note, the recent bout of rough surf has created some nice sandbar points and troughs. These are scattered all along the coast, and offer great feeding spots for fish in the surfzone. Look for shallow sandbars within casting distance from the beach with deeper water nearby. Pompano, whiting and other fish like to patrol the drop off, looking for prey items like ghost shrimp, sandfleas and coquina that may be pushed off the bar by the rolling waves. This time of year they are often joined by post-spawn sheepshead seeking refuge and looking to replenish their strength before returning to the bays for the summer. These are good locations to find flounder, speckled trout, redfish and drum too. As they all move into these beach “holes” seeking food and protection from sharks and dolphin.
The popular double drop “pompano rigs” come into their own this time of year. And they account for a large number of pompano taken by surf casters. These work best when tipped with an inch long piece of fresh shrimp and/or Fishbites or Fishgum. The popular synthetic bait strips come in a variety of flavors and colors. It stays on the hook longer than just shrimp, and is formulated to dissolve slowly in seawater, leaving a scent trail back to your hooks. They are so effective, that at times no natural bait is needed. Another trick is to use a bit of Magic Thread (thin elastic) to wrap around soft baits like shrimp or ghost shrimp around your hook. This makes it harder to cast off, or a fish to tear off from the hook. Most of the local bait and tackle shops carry this and other specialized surf fishing items.
Use just enough weight to hold your bait in the current or cast out to reach the edge of the bar, then place the rod in the rod holder to wait for a bite. That is often a smashing strike,. So set the drag light enough to allow a hard running fish to take some line. This help prevent the hook from tearing from the fish’s mouth, line breaking, or sand spike from being pulled over. The last is a distinct possibility as a cownose ray, bull redfish, large black drum, or shark may be on the other end of your line.
Catches from the Gulf State Park Pier have been hard earned lately. And very few spanish mackerel have been landed there so far this year. Rough, dingy water is the most likely culprit, though the sandbar east of the pier has gotten much shallower and wider recently. Most of the sheepshead have been landed close to the pier house in a trough along the beach. Some pompano, a few nice flounder, and even a rather large speckled trout were caught there too. Most all with live shrimp on the bottom in dingy water. But once the water calms and gets clearer, the fish (and fishermen) will probably spread out a bit more, providing more opportunities for all. Especially when the spanish mackerel show up.
The west jetty and seawall at Perdido Pass usually see good numbers of spanish mackerel this time of year too. Except for the NEAP tide period (April 27-29), we will experience some strong incoming tides. This brings clearer, green Gulf water into the Pass. And the mackerel often move in with it. Spoons and diving plugs are popular, but the old standby white “Looney Jig” is hard to beat when the mackerel are running. Just be sure to use some heavy monofilament or light wire as leader protection from sharp mackerel teeth. And carry some needle-nose pliers for safer hook removal.
Pictured: One of the few surf fishing bright spots lately, local videographer Matthew Isbell (aka Bama Beach Bum) with his personal best 4.5 pound pompano. (Pic by Mathew Isbell). Flounder have been landed on the Gulf State Park Pier lately, including this one by local anlger Drake Burgett. (Pic by Ellis Cattan). 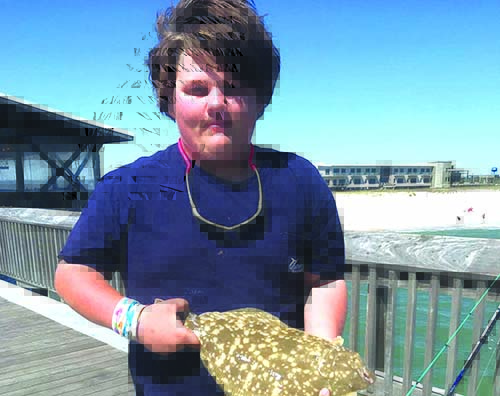