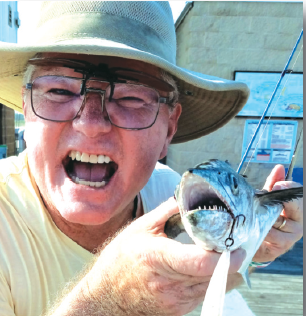 Even as more young people return to school, a typical midsummer weather pattern will continue across the area into mid August. But the recent abundance of rainfall and lack of any serious tropical activity (to stir the Gulf significantly) has conspired to lower water salinity and sparked invasions of shoreline seagrass and stinging jellyfish. Though this may interfere with from-shore fishing along the coast, there are still pockets of relatively clear water that allow anglers access to numerous ladyfish and bluefish.
The early morning high tides experienced at the beginning and end of this period will encourage fish like these to feed along the shoreline at daybreak. Anywhere you find baitfish accumulated near the beach before sunup should draw the attention of these intermediate sized predatory fish.
They may not be the preferred food fish, but they are quite edible and sure are a LOT of fun on light tackle. Search different venues to find those with less vegetation and “sea nettles” to make fishing easier on yourself.
Walking the shoreline at daybreak with 8 to 12 pound class spinning tackle, while casting a ¾ to 1 ½ ounce silver spoon is a great way to get in on this oft short-lived action. Look for gamefish swirling or splashing on the surface as they chase minnows, or groups of shorebirds which may indicate the proximity of baitfish.
Medium sized plugs work well too, but they may not have the casting range of spoons and jigs especially with an onshore breeze. Of course early morning thundershowers can greatly influence the wind with ‘gust fronts’ extending several miles away from the cell. So check the radar before daylight to determine any ‘storm affected’ areas, and their direction of movement to help determine preferable locations where you may evade disruptive weather. Try to avoid being in the path of these coastal storms, as lightning often strikes quickly as they approach. There will still be fish to catch after it has safely passed.
The most popular venues to fish are the Gulf State Park Pier, and Perdido Pass seawall (Alabama Point) for good reasons. Access and parking are easy, and is shelter nearby in case of storms. But mainly they are great places to find fish at any point during the day. Mornings and evenings are usually best at the pier as well as the pass. Though the few hours either side of the tide change are often good fishing at the pass. Both venues hold “LYs” (scaled herring), and the two to three inch long baitfish draw plenty of larger fish which may bite at any time of day. Spanish mackerel are a favorite target species, but there are often many more bluefish, ladyfish and other jacks around.
In addition, there are increasing numbers of redfish and mangrove snapper available this month. Just be aware of the regulations on these fish, especially mangrove snapper, which are considered “reef fish”, and in Alabama require the $10 ‘Reef Fish Endorsement’ license in addition to your saltwater fishing license.
Little Lagoon Pass in Gulf Shores is another popular venue, and it may not be quite as crowded now since school has started. Just be aware they are still dredging the pass (on weekdays after 7am until 4 or 5 pm). Plus the seaweed and jellyfish have been quite thick there lately. But conditions change from day to day, even during the day as the tide flows, ebbs and changes direction providing shorebound anglers with a variety of options and target species. Speckled trout, redfish, flounder, and mangrove snapper are usually available on live or artificial bait. As well, there may be ladyfish, bluefish and even spanish mackerel near the mouth in the Gulf (when sea nettles are not too bad for wade fishing). Scouting the different tides the passes offer both in the morning and late afternoon may present you with more favorable fishing conditions at some point. Once you find a ‘bite’ it may be possible to key in on it for several days around the same time, as long as the other conditions remain similar as well. This holds true for most fishing venues this time of year as well.
Some anglers try inland venues this time of year, like Jim and Carolyn Myrick. When the Gulf is too rough, or grass too bothersome this angling couple likes to fish “The Big Mouth” named Pelican Point at the mouth of Weeks Bay. White trout, ground mullet and croakers are the primary catch there, but ‘bull’ redfish and huge jack crevelle often make their presence known there this time of year too. But light tackle with dead shrimp or cut bait is all that is needed to catch panfish like delicious white trout.
Set rig fishing for pompano, has been particularly challenging recently because of all the sea grass and sea nettles to deal with. On top of that, there simply are not very many ‘keeper sized’ pompano around this time of year, and the distracting by-catch is so high. That is typically what G2 Coastal beach guide Jordan Gooding has been running into lately. Recently, Gooding reported “Catch of the day included Pompano, Grass, Ladyfish, Grass, Hardheads, and more Grass.” LOL! You get the idea. But if you stick with it, ‘grinding out’ a decent catch is often possible for your efforts.
Especially when utilizing specialized baits like live sandfleas with Fishbites or Fishgum on your set rigs. But note there may be some ladyfish, bluefish or even spanish mackerel come around at any time. So be sure to have a rod set up with a jig to quickly cast at any schooling fish which may be feeding near your bottom fishing spread.
Be ready to take advantage of any opportunity the fish give you this time of year.