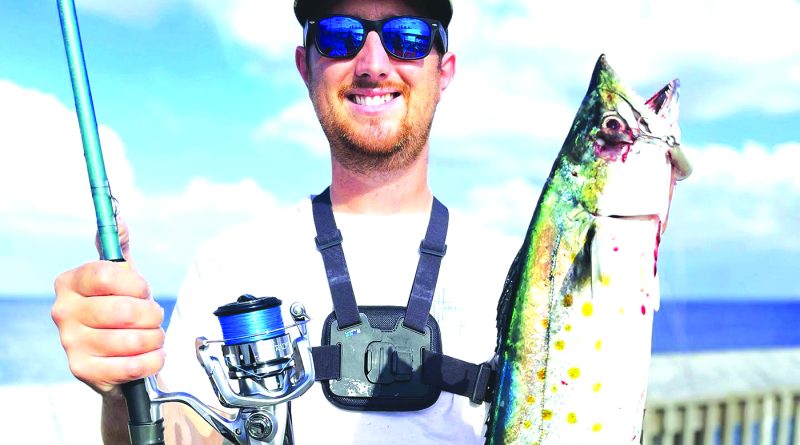 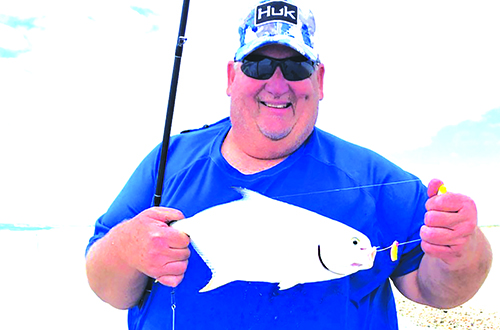 More typical springlike weather has aided shorebound anglers with warmer temperatures and less wind to deal with. The water temperature in the surfzone is now more comfortable in the low to middle 70s. And our coastal waters have calmed and cleared, allowing for more pompano to be landed. Gulf State Park Pier patrons have had better success with some nice spanish mackerel being pulled in, If you can keep them away from the abundant sharks.
All-in-all it seems like a pretty normal May fishing pattern is in place with the notable exception of speckled trout, which have been absent for the most part along the Gulf beaches so far. Hopefully that will change for the better as we approach the full moon (May 16) near the end of this fortnight. Speckled trout can be targeted in the surf all along the Baldwin County coast and the inshore waters too. They do like live shrimp, but also respond to a variety of lures. The topwater bite on calm mornings can be eventful, but more are caught using slow-sinking twitchbaits or jerkbaits. As the sun gets higher in the sky, fish deeper to find trout sulking from bright daylight and hiding from predators.
Meanwhile numbers of pompano will be decreasing this month as they move offshore and westward to spawn. But it also means the time is nearing for other jack species to arrive along the coast en masse. Ladyfish (called skipjack) and blue runner (called hardtails) will soon become the predominant species prowling the surfzone through the balance of the season. They are very eager to bite most baits and lures to the chagrin of many pompano fishers more intent on a first-class meal. But they too are great sport on light to medium spinning tackle, and pretty fair on the table with proper preparation.
For one, that means bleeding your catch by slitting the gill rakers and placing the fish head first into a pail of seawater. Ikejime, originated in Japan is the epitome of this method to dispatch any fish quickly and humanely, while draining much of the blood out to render it most palatable. Proper icing is essential to keep your catch as fresh as possible before it is filleted. Fish wrapped in a plastic bag surrounded by ice will maintain better quality and firmness of flesh than those simply dunked into ice water where they get soggy. Totally deboned fillets are easier to eat, especially for kids.
Ladyfish are best prepared as fishcakes or fish salad after being filleted and the meat scraped from the skin and bones with a spoon. The flesh can then be steamed or microwaved with a little butter and seasoning to make a toothsome fish salad. These smaller sized jacks are eaten in most parts of the world where they are found, though many Americans tend to have more discriminating palates. But even traditionally prized fish like pompano, speckled trout, sheepshead, redfish, puppy drum, bluefish, spanish mackerel and even flounder will taste better and last longer refrigerated after being bled.
Surf and pier anglers can still target pompano with set rigs baited with just fresh dead shrimp, sand fleas (mole crabs), or ghost shrimp. But with more varieties of fish in the water pecking at their offering, adding a piece of Fishbites or Fish Gum just makes more sense. Otherwise the more numerous bycatch species will strip your hook bare before the target species has a chance to see it. And plenty of pompano and whiting (Gulf and Northern kingfish) are caught using just the synthetic bait strips alone.
Using jigs is another way to target pompano, and perhaps avoid some of the overly aggressive ladyfish and blue runners. Lead head pompano jigs, or the Goofy jig/ Silly Willy rig are a great way to target the more desirable species. Just work the lure slowly across the bottom, perhaps with an occasional bounce up off the bottom. The jig can be tipped with a sandflea, piece of shrimp, or just a strip of synthetic bait. Bright colors like chartreuse, orange, hot pink, or yellow tend to get the attention of the fish faster. As conditions change daily, anglers seem to have a new favorite color and flavor.
Live shrimp are often used from the Gulf State Park Pier where the old saying “everything eats shrimp” holds true. Drifting live shrimp on light tackle may catch speckled trout or pompano. But more often they elicit a bite from more abundant ladyfish, blue runner, bluefish, spanish mackerel, or pinfish. Hardly the target species. Though less desirable, these fish are edible and even quite tasty when treated with a little care. Pictured: Jay Reed caught this nice pompano on a windy, rough day. (Photo by David Thornton) Stephen Franklin -with a Spanish mackerel landed on the GSP Pier. (Photo by Bama Saltwater)