Plan is to make NCAA Beach Volleyball Championships best yet 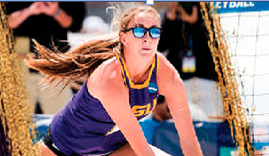 Plan is to make NCAA Beach Volleyball Championships best yet

By Fran Thompson
Planning is underway to make the 2019 National Collegiate Beach Volleyball Championship, scheduled May 2-5 at Gulf Shores Public Beach, the most fan friendly tourney to date.
Rightfully promoted as the premier opportunity to see the best collegiate beach volleyball competition in the country, the tourney will include activities such as autograph sessions with all eight participating teams and the championship fan zone, where fans can buy official championship merchandise and interact with other beach volleyball fans.
Cornhole and giant jenga will be on the beach throughout the championship near court no. 3. There will also be a games area for near court 3, with buckets and shovels available to play with. A junior beach volleyball tourney, with more than 100 participating teams, will also be held in conjunction with the championship. More events will be added.
Weekend VIP ($225), courtside seating ($80) and general admission ($50) tickets are now on sale at eventbrite.com. Single day tickets will go on sale in early April.
The top eight teams in the country, which as of March 14 included Florida State, LSU and Florida International (see sidebar), will vie for the national championship in Gulf Shores, and LSU’s top duo, Claire Coppola and Kristen Nuss (pictured) were claimed AVCA Pair of the Week Honors following a 4-0 performance at the GCU Beach Tournament in Arizona, marking the first time that a pair from LSU has been named the national pair of the week.
The National Collegiate Beach Volleyball Championship was named the NCAA’s 90th and national championship in 2016, with Southern Cal winning the historic first title in Gulf Shores and then repeating in 2017, before UCLA prevailed last May. The event is under contract to return through 2022, and ESPN will provide live whip-around coverage of every match throughout the tournament and will televise the championship match live. Beach volleyball is the fastest-growing NCAA sport, with 1,000 student-athletes across the country playing the sport.