Plans call for 3,175 residential units on northshore of Intracoastal 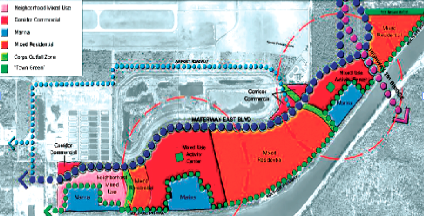 Plans call for 3,175 residential units on northshore of Intracoastal
27,000 sq. ft. of retail, 318 boat slips, 100 acres of green space included
By John Mullen
A project that has had Army Corps of Engineer approval since 2006 on the Intracoastal Waterway in Gulf Shores is finally moving forward.
Coastal Resort Properties is seeking approval from the city for a planned unit development on 218 acres on the north shore of the ICW near the Claude Peteet Mariculture Center and the Gulf Shores airport. A new Alabama Department of Transportation road and bridge project would cut through the eastern edge of the new development.
Plans call for 3,175 residential units, 27,000 square feet of retail and commercial space, 100 acres of green space with parks, lakes and boardwalks and three marinas. The marinas will have a combined 318 boat slips and space for 490 boats in dry storage.
“This is a critically important project,” Mayor Pro Tem Philip Harris said. “That whole north side of that intracoastal was zoned industrial for years. We’ve seen the threat to our economy with Hurricane Ivan and Katrina we really took a hard look at the north corridor over there and that is where this ICW zoning came from. An opportunity to incentivize the change and hopefully build a second frontier that would include some vacation destinations and a second source of revenue.”
This project along with 14 others on the waterway received environment impact statement approvals from Corps way back when but each project stalled in the economic downturn of 2007-09. City officials hope this project will be the first of several to keep drawing in tourists even if there is hurricane and storm damage in the future.
“This rezoning was done in order to rezone from industrial property to promote shopping and residential in this area,” Director of Planning and Development Director Lee Jones said. “We’ve really seen it as kind of a second opportunity for waterfront activity secondary to the beachfront.”
With Corps permit still in hand that’s a major hurdle already cleared for the nascent development.
“The (environmental impact statement) permit is still in place,” Attorney Richard Davis, representing Coastal Resort Properties said. “It has a life of a couple of years yet. We’ve applied for a five -year extension. The consideration of that extension has not come through yet.”
The city and Coastal Resort Properties ownership have been working on details for this property for years and it will contain a right of way for a roadway the city sees as key to the development of the area.
“These folks have been involved on this north side of the canal and ownership of this property for a long time,” Harris said. “We’ve been working with them for the last couple of years on the location of the city’s portion of the spur road. It will come through this property and we needed the right of way to connect to our Business and Aviation Park and back out to highway 59. We appreciated the relationship.”
In hoping to foster growth along the canal the city rezoned much of the property in the area from industrial to a special overlay district called the Intracoastal Waterway North district. The rules for that zoning area would allow for eight-story buildings and about 42 residential units per acre. Coastal’s PUD request is asking for six-story buildings and will only have 21 units per acre.
“It’s not often you get a request to downzone property,” Harris said. “This is a big deal in right of way and strategic roadway placement and also for the zoning for the future of that 218 acres. It gives really an opportunity to manage that growth and align that growth with the city’s vision.”
During the regular session, the council also:
• Accepted an amendment to the funding agreement between the National Fish and Wildlife Foundation (NFWF) and the City of Gulf Shores to include an additional $1.4 million for the implementation of habitat restoration work as part of the Bon Secour/Oyster Bay Wetland Project.
• Accepted a bid from Traffic Solutions of Herndon, Virginia, for $23,000 for a radar trailer. The city only received one bid and had budgeted $25,000 for the trailer.
• Voted to allow a change in the Aberdeen Villas planned unit development to add 13 single-family houses on a 4.7-acre parcel off of Cotton Creek Drive.
• Voted to annex in a lot at 19040 Pine Acres Road north of County Road 8 and west of State Route 59. Lois Gale Walker seeks annexation of her 30,610 square foot property that contains a single home. The purpose of the annexation was to be in the Gulf Shores City School district.
• Approved a change in the ordinance regarding sleeping in vehicles. The amendment is intended to bring the ordinance in line with court decisions that were rendered after the original ordinance’s adoption and better describe the activities regulated under this section, a city memo stated.
• Approved Gulf Shores Utilities request to sell off some surplus property, specifically a 2016 Ford F-150 pickup that was totaled in a wreck.