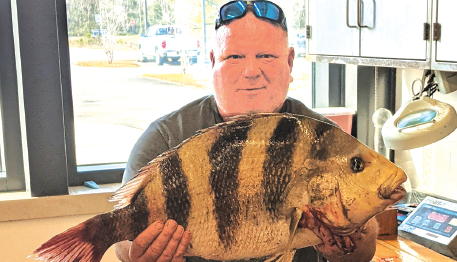 By David Thornton
Success for some fishing days is measured in quantity. While other times it is quality that makes the impression. Then there are rare days you get a bit of both.
Wesley Olson recently traveled to the Lillian area from his home in Delaware to spend the holidays with his son, Sean. Sean Olson is an XPO (Executive Petty Officer) in the US Coast Guard with 16 years of service, now assigned to the station in Pensacola.
Since settling near Lillian in 2021, Sean has mostly fished Perdido Bay with good success targeting sheepshead.
But during his dad’s recent visit on Wednesday December 29, they decided to venture into Mobile Bay for just the second time.
After a bumpy boat ride, the party set up on some reef structure in the bay with fiddler crabs. The very first fish landed was Wesley’s remarkably memorable sheepshead. A nearly 27-inch long, 14-pound 4-ounce sheepshead which eclipsed the former Alabama state record by 6 ounces!
And it was caught on a 2000 size reel with 10 pound line. Sean realized the significant size of the fish, and wanted to cut the trip short to get it on the scales before any weight might be lost. But his dad insisted they try a while longer. They ended the day with about 14 sheepshead, which is a very nice haul. Alabama saltwater regulations allow 10 sheepshead per angler per day, with a 12-inch minimum fork length.
“Sean put us on them. He is the one that knows about them,” Wesley said. The sheepshead was documented at the Alabama Marine Resources Division headquarters in Gulf Shores, and resides in the freezer there. They estimate it may have be 20 years old, and was donated for scientific research. Thank you Wesley Olson for your contribution, and thank you Sean Olson for your service and putting your dad on such fine fish!