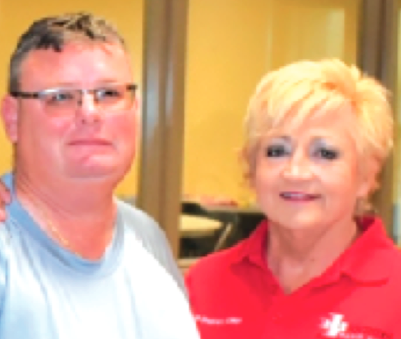 Retired cop & longtime coach McLain dropping lbs. while helping kids
By Marc Anderson
Retired Orange Beach Police Sgt. David McLain has been coaching for over 30 years and most of that time has been in and around Orange Beach.
Coach McLain is no stranger to helping kids achieve things they didn’t think were possible, such as winning area championships on the basketball court or bringing home softball trophies. Now it’s his turn to dig deep, not to win trophies but to shed pounds with the encouragement of Mayor Tony Kennon, Orange Beach Middle/High School girls basketball players, fellow coaches and guidance from Southern Rapid Care medical professionals.
On a recent July morning at the Orange Beach Recreation Center, Orange Beach High School Athletic Director Chase Smith intently took a weight measurement on the scale Coach McLain was standing on, as two dozen girls basketball players looked on with Mayor Kennon and Shelia Stephens of Southern Rapid Care.
“Two-thirty-six! Six pounds,” Smith announced with cheers from the players. After just two weeks of working out and eating healthy, Coach McLain went from 242 pounds to 236.
Each week Coach McLain will do similar weigh-ins to show off his progress with an ultimate goal of shedding 75 pounds.
“Honestly, if I can get under 200 pounds it will be a celebration for me,” Coach McLain said. “It’s been a long time.”
He knows he has a tough road ahead but he said he is motivated by the girls basketball team. McLain will be assisting Coach Selitha McGatha with the Orange Beach Junior Varsity and Middle School girls basketball teams.
“At 53 years old it does take a little more,” Coach McLain said of the challenges ahead. “I never expected to ride a bicycle 12 miles. I never thought I would be able to do that again. And jumping on the elliptical. I mean it’s exciting. I enjoy working out, but the girls have motivated me because of the way they are working in the weight room, in strength and conditioning. And that’s something big; something major. Those girls have got me fired up. The way they work so hard. I want to work hard for them too. That’s the reason why I’m doing this.”
From his days as a standout cross country and track team captain at Troup High School in LaGrange, Georgia to earning the respect in the police department in Lanett, Alabama for his never-back-down attitude, McLain has constantly overcome challenges in his life. But he says none of it would have been possible without coaches.
“I had a rough childhood,” McLain said. “Coaches were a big, big influence in my life. They knew what I was going through and they took me underneath their wings. I’m blessed. And that’s the reason why I coach today and feel God has put me into a position for this. I want to give back what they gave me.”
McLain has been paying it forward ever since 1985, two weeks after graduating high school, when he began coaching baseball in Huguley, Alabama and from there it was to Valley High School coaching football, basketball and softball. Then in 1995 after 7 years at the Lanett Police Department, McLain followed then Police Chief Robert Vinson to Orange Beach.
“I’ve been in this community for over 25 years,” McLain said. “The first year I was here they asked me to start coaching softball here and we became pretty successful.”
From coaching the Orange Beach Rec League to Gulf Shores Middle and High School, Coach McLain gives credit to the Orange Beach City Council and the leadership at the police department through the years for allowing him to do it.
“If it wasn’t for them, I wouldn’t have this opportunity,” he said. “They knew how important it was in the community to build relationships between the children of the future and the police department.”
McLain retired from the Orange Beach Police Department in early 2018. He still works part-time for the city in Public Works and is a substitute teacher as well.
“When I was coaching on the sideline in rec league over here, I always said if Orange Beach had a high school I would love to coach here in Orange Beach because it was like my dream,” Coach McLain said. “God has blessed me. I’ve been coaching since the year I got here. It’s community. It’s home.”
Now as Coach McLain encourages his players to achieve excellence on the basketball court, they will in turn be cheering him on to achieve his goal and to never back down.
Pictured: Coach David McLain and Shelia Stephens of Southern Rapid Care.