Rick Cheatwood has been tending bar from home for 34 years 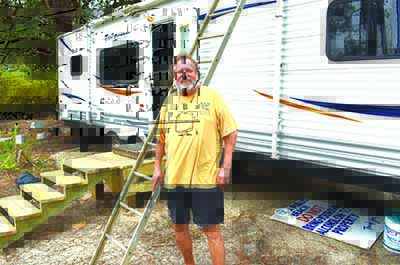 Rick Cheatwood has been tending bar from home for 34 years

By Fran Thompson
Rick Cheatwood hasn’t quite lived in a trailer – or sometimes a boat – at Pirates Cove for all of the 34 years since he moved to South Baldwin. But the native of Broken Arrow, Oklahoma (near Tulsa) has never held another job other than tending to the Pirates Cove riff-raff since making his way to the Gulf Coast.
Rick lived in an abode in Orange Beach for eight or 10 months before Pirates Cove’s patriarch, the late Paul Mueller Sr., offered him a billet on his boat, Miss Kitty, docked at the marina there.
“I’ve been working here going on 34 years,’’ Cheatwood said. “When I first started, sometimes I would work morning ‘til midnight doing everything from cooking to washing dishes to tending bar. Karl had just turned 13. I’ve watched both him and Paul grow up.’’
The Mueller family bought the Pirates Cove property in 1956 and have operated a restaurant and marina there ever since. Paul Sr. passed away in 1986. But his wife, Eileen, and children Karl and Paul, have continued what Paul started.
A bonafide free spirit, Cheatwood also lived in Colorado before making his way here for what was supposed to be a short visit with his sister, who kept a boat at Pirates Cove.
“My plan was to move to Seattle. But I went shrimping and sailing and decided I did not want to leave this place,’’ he said.
Cheatwood still works sometimes long hours at the local institution during the tourist and boating seasons. But he has also made it a point to spend his winters even farther south.
An avid diver, he often went to Roatan in Honduras and has since settled on Oaxaca, Mexico to re-charge. The exceptions to his winter sojourns have been years like this, when hurricanes strike home.
“Sometimes I stay a month. Sometimes I stay three months,’’ he said. “When I first started working here, Paul told me as long as I worked from April to September every year, I could take off every winter and still have a job when I got back.’’
Cheatwood spent the first two months after Hurricane Sally sleeping on friends’ couches while looking for a new home, as the storm destroyed his camper. Just last week he found one, a 2011 model he bought for $5K.
“I’m glad to have my view back,’’ he said as he looked south to Bear Point. “I’ve had 30 years of looking at that. I love it.
“The Muellers have been very good to me over the years,’’ he added. “They provide us with cadillac insurance. You know they could have said they needed this camper space for more parking. But they didn’t. They said they were glad to have me back.’’
Cheatwood won’t even attempt to estimate the number of bushwhackers he has made over the past 34 years, but the bar sometimes sells as many as 3,000 on a sunny Saturday.
“Tens of thousands for sure,’’ he said. “And I still enjoy talking to the people who come here. I tell people that I make my living with my mouth.’’
Cheatwood has had a roommate for the past 16 years – his dog Maxine, who he is positive loves living on the Pirates Cove campus as much as he does.
“It’s like I told Mobile Monthly, when I die I want to come back as a Pirates Cove dog,’’ he said.