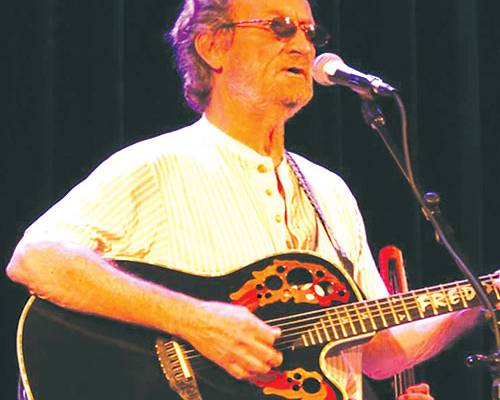 By Fran Thompson
“One could structure an entire country record collection around Freddy Powers’ powerful pals Merle Haggard, George Jones, and Willie Nelson,’’ music journalist Eugene Chadbourne wrote in an obituary for the songwriter and producer, who battled Parkinson’s Disease for years before he passed away on June 21.
Powers, considered a pillar of the outlaw country genre for his unique blending of Dixieland with honky tonk and a regular at the Frank Brown Songwriters Festival since 1996, will be remembered with a full military service followed by a final roast at The Flora-Bama on Sunday, July 28 beginning at 2 p.m.
“He said he didn’t want a celebration of life with people getting up and talking about how great he was because he already knew how great he was,’’ said Freddy’s widow, Catherine Powers, who will be in town for the service and roast. “He wants his friends to throw him under the bus so he can laugh so loud that he and the Lord will be falling off their cloud. He said if his friends couldn’t think of a good story about him, they should make one up, because it probably was true. That was Freddy.’’
The military service – Freddy was a Marine CIV investigator for six years – and roast will be followed by a concert featuring Freddy’s songs performed by the local songwriting community.
Powers was a FBISF regular for 20 years and played for the last time on stage at the 2012 fest. He wrote his last song, “Dreamin,’’ while staying on the family bus with Catherine on Perdido Key in 2012. “He loved it here, and we came as often as we could,’’ Catherine said. “This was our home away from home. So many songwriters come here and live here. It’s a songwriters’ paradise.’’
Catherine said for the last eight years of his life she and Freddy spent most of their time living on the bus she called a traveling hospital. But every time the couple went to the Flora-Bama, the musicians would welcome them by playing one of Freddy’s songs.
“They knew his songs and would pay tribute to him,’’ she said. “But even on days when he couldn’t get out of the bus, he could still enjoy the view of the bay with the dolphins swimming by. He absolutely loved it here.’’
Freddy was raised in Texas and got his musical training playing with his family’s band in West Texas honky tonks. In Fort Worth, he started working with Paul Buskirk, who first put Nelson and Freddy together. Freddy played in Nelson’s band, and later co-produced his 1981 record Somewhere Over the Rainbow, a million seller.
Freddy and his band, the Powerhouse Four, were a popular Las Vegas lounge act in the 1970’s. The band – a tuba and three banjos – mixed comic elements with his Dixieland jazz-country music.
He later lived alongside Haggard in a houseboat community on Lake Shasta in California, where he met Catherine. A member of Haggard’s band, the Strangers, Powers wrote a string of hits for Haggard in the Eighties, including “Let’s Chase Each Other Around the Room,” “A Place to Fall Apart” and “Natural High.’’
He also wrote George Jones’ “I Always Get Lucky with You,” as well as tunes for Ray Charles, Big & Rich and others.
Powers also co-hosted a talk show on the Austin Music Network and in 2000 released The Country Jazz Singer. He was diagnosed with Parkinson’s in 2004 and founded the Freddy Powers Parkinson Organization, which raises funds for research and treatments for the disease. “It’s going to be a good show. I hope people will join us,’’ Catherine said.