Rosamond Johnson celebration May 1 at his namesake Perdido Key Beach 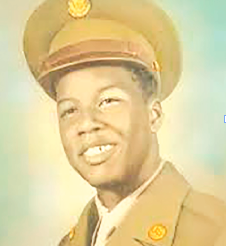 Rosamond Johnson celebration May 1 at his namesake Perdido Key Beach
The annual Rosamond Johnson Beach Day celebration will take place at his namesake Johnson Beach in the Gulf Islands National Seashore at 10 a.m. on May 1. The event was canceled in 2020 due to Covid restrictions in place at that time.
After enlisting in the US Army at 15, Johnson (pictured) died in combat two years later on the Korean Peninsula. While engaged with the enemy, on July 26, 1950, Private Johnson carried two wounded soldiers to safety. He was fatally wounded while attempting to save a third wounded man.
On August 21, 1950, Rosamond was posthumously awarded the Purple Heart for wounds he sustained while saving his fellow soldiers.
In honor of the sacrifice paid by Army Private Rosamond Johnson and his family, the National Park Service waives entrance fees to the Johnson Beach area from 9 a.m. to noon on the day of the annual commemoration ceremony. The national seashore was granted an entry fee waiver at the park’s request in 2019.
Erin Wilmer, Chair of the Chamber’s Military Affairs Council stated, “The story of the selfless bravery of Private Johnson and the history of this beach is a story worthy of national attention and we hope to see the event grow exponentially over the years.”
At the time of Johnson’s death, Pensacola beaches were racially segregated. The Sunset Riding Club, Inc. leased a county-owned recreational area in 1950 for the sole use of bathing and recreational facilities for “colored citizens.” In honor of his ultimate sacrifice, and in recognition as the first Escambia County resident to die in the Korean Conflict, the recreational area became known as Rosamond Johnson Beach. The area became part of Gulf Islands National Seashore in 1971, and the name was retained. Today, a monument and exhibit honor Private Johnson and his service.
For the past decade, the Perdido Key Chamber of Commerce has invited the Johnson Family, local and national dignitaries, and the public to the beach to honor the memory of this local hero.
Johnson Beach is open daily from 5 a.m. to 8 p.m., March 1 through Oct.1 and 5 a.m. to 6 p.m., Nov. 1 thru Feb. 28. For more info, go to VisitPerdido.com.