Rosie Ledet a unique female presence in the zydeco world 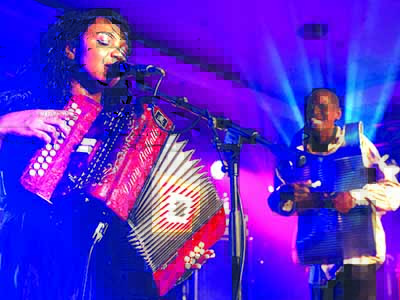 Rosie Ledet a unique female presence in the zydeco world
Rosie Ledet (1:15 p.m. showtime) provides a unique female presence in the male-dominated zydeco world.
Hailng from the rural town of Church Point, Louisiana, she learned to play the accordion by watching her husband and then practicing on his accordion while he worked during the day.
With her self-penned tunes, Ledet (below) provides a unique female presence in the male-dominated zydeco world Singing in both Creole French and English that is often sly and lusty and always distinctive and bluesy. It is now wonder, she wows audiences wherever she goes.
A prolific songwriter, Rosie has released nine albums showcasing superb lyrics, strong vocals and skillful accordion playing.
She and her band began performing in 1994 and have gradually spread their touring base to include the rest of the U.S. and Europe.
Rosie describes music as “sped-up blues. Zydeco having come from the blues.”
Rosie and the Playboys served as an opening act for Bob Dylan at the prestigious Newport Folk Festival two years ago.
She even had the Godfather of Soul get on the good foot in Alabama.
“Probably the coolest thing we had happen was when we were at City Stages in Birmingham,’’ she said. “James Brown got up and he was dancing to us. Now any time you can make the Godfather of Soul dance, you must be doing something right.”