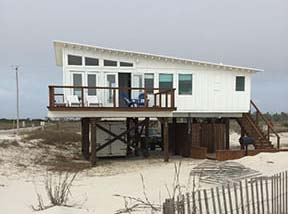 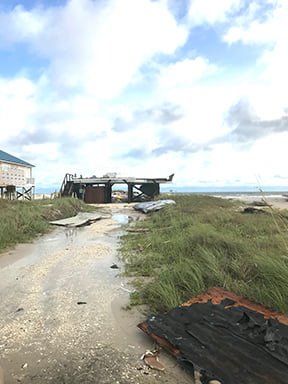 Sally destroys vintage 1950’s beach house in Fort Morgan
The Butterfly House survived Camille, Frederic, Ivan, Katrina
By Fran Thompson
A historic Fort Morgan home with a unique past, distinguishable by its hyperbolic paraboloid roof, was destroyed during Sept. 16’s Hurricane Sally near dawn landfall.
Between its locations on Little Lagoon and in Fort Morgan, the home, dubbed The Butterfly House, had survived Hurricanes Camille, Frederic, Ivan and Katrina.
The Category 2 Sally swept the beachfront home from its pilings near the corner of Triple Tail & PonceDeLeon at mile marker 4 on Ft. Morgan Rd.
The unique roof is a double ruled surface with vertical cross sections that are parabolas, and horizontal cross sections that are hyperbolas. A Pringle potato chip is an example of a hyperbolic paraboloid
“I haven’t seen another roof that looks like it,’’ said Glenn Richardson, whose family has owned the home since 1959, around five years after it was designed and built by renowned Mobile architect Arch Winter in a style that has since been deemed modern vintage.
The home originally sat on arguably Gulf Shores’ most spectacular parcel between two still standing oak trees that Glenn Richardson climbed as a child.
Nestled on a peninsula yards north of Little Lagoon Pass, the parcel is now home to Compass Point Condos. The Richardsons sold the land to the developers following Hurricane Ivan.
“The original owner was pretty famous in the 1950’s as an early modernist architect,’’ said Glenn, himself an architect with degrees from Auburn and UVA.
Glenn’s parents purchased their first Gulf Shores vacation home in 1955, four years before they bought The Butterfly House.
The family of seven, Glenn’s father, an MD, on the weekends, left their Columbus, GA home to spend summers in Gulf Shores throughout Glenn’s childhood.
Glenn had a crabbing business that he operated from the beach in front of the house in the 1960’s, selling his catch to local restaurants
“It was real tight with seven people. But we had cots and pallets we would pull out from under the beds. I do remember how hot it could get without AC. But it was a great,’’ Glenn said.
The Compass Point developers preserved the two oak trees when they bought the land from the Richardsons.
The family then moved the home to mile marker 4, where Glenn built an addition using the hyperbolic paraboloid design for the roof that doubled the home’s original 24’ by 24’ size.
With an open concept kitchen and living room, the Butterfly House afforded simultaneous views of ships in the bay and dolphins in the Gulf. It also featured original rare heart pine floors.
Glenn’s mother Fay gave the home its name even before the Richardsons bought it. Its sloping roof lines evoked the wings of a butterfly, said Glenn’s wife Kendra.
“It was the only modern vintage home around here,’’ Kendra said. “My husband’s grief is mostly over the loss of the architecture. It had its original jalousie windows from the early 1950’s.’’
Kendra, who retired after 25 years of teaching in Selma schools, and Glenn went on a blind date when she was at Alabama and he was at Auburn 35 years ago. They reconnected at a mutual friend’s daughter’s wedding. The same mutual friend who arranged the blind date. They have been married for five years.
Kendra relays a story that the house is home to the ghost of a local character and family friend named KP Morgan, who died this past February in the home.
KP believed that his ancestors founded Fort Morgan and that he was related to the Captain Morgan who had a rum named after him.
Kendra said one of KP’s last sentences was, ‘Aint it pretty.’’
“We never believed him about his ancestors. But he believed it,’’ she said. “He was looking at the Gulf from the beach when he dropped dead.
“He was drinking a beer and watching the dunes when he died,’’ she added. “We all believe that as hard as the loss was for us, it was poetic justice that he died in that house.’’
The Butterfly House pilings and hardwood floors and supports held strong through Sally, but the Richardsons will have to rebuild to current construction codes.
Kendra does hope they can use some of the remaining materials to build a sundeck and changing room in homage to KC, as she suspects his ghost may remain in the place he loved so dearly.
She and Glenn already have a home that Glenn built farther from the Gulf on Fort Morgan. And yes, that also includes a hyperbolic paraboloid roof.
Glenn and Kendra, whose father was from Mobile, both have deep connections to Pleasure Island.
“It was natural for us to both land here. We love it more now than we ever did,’’ she said.
They plan to rebuild as soon as possible, and the new home will be more in the modern style.
“We plan to make it simple and inexpensive because things on the beach get washed away,’’ Glenn said.
“It was like being in a tree house at the beach,’’ Kendra said. “You could see boats passing in the bay from one window and the surf crashing from another window. It was just an awesome spot.
“I guess Glenn wants to build back bigger and stronger. I know we want to give every bedroom a view and a balcony,’’ she added.
“We are experts on what people love in a family beach house. We will just have to let people start making new memories there.’’