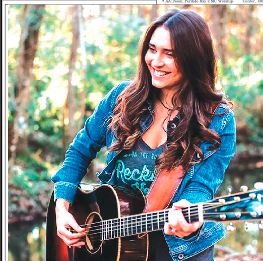 Davis Corley, Christina Christian, Taylor Craven, Amanda Pruitt, Wade Sapp and Anthony Peebles will play original music in the round on Tuesday, July 16 in the courtyard at the Point Restaurant on Innerarity Point beginning at 6 p.m.
The concert is part of Nick Biebricher’s Sandy Roots Songwriters Series, an event held the third Tuesday of each month at the Point. Doors open at 5p.m. and shows last approximately three hours. There will be a $5 cover. An open mic night for local original songwriters follows each showcase. Biebricher said he sponsors the series to give local singer/songwriters the opportunity to showcase their talents with the best singer/songwriters from around the country. More information: Sandyrootsmusic@gmail.com or (251) 284-2443 or sandyrootsproductions.com.
Pictured: Perdido Key resident Christina Christian released her debut album entitled, Silent Sea, in 2017, and her most recent release, “Dolly, Would You Pardon Me,” has received airplay in the Southeast as well as England and Australia in 2018. Her song “Little Miracles” has been adotped as the official song of the Miracle League of Coastal Alabama. Christina is married to Songwriters Series founder Nick Biebricher.