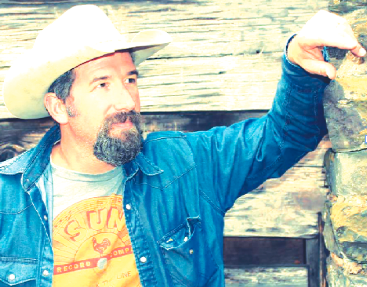 Megan McMillan, Joseph Seely, Brooke Brown, Ed Adams, Matt Prater and Austin Foreman will play original music in the round on Tuesday, Ma 21 in the courtyard at the Point Restaurant on Innerarity Point beginning at 6 p.m. The concert is part of Nick Biebricher’s Sandy Roots Songwriters Series, a monthly event held the third Tuesday of each month at the Point. Doors open at 5p.m. and shows last approximately three hours. There will be a $5 cover. An open mic night for local original songwriters follows each showcase. Biebricher said he sponsors the series to give local singer/songwriters the opportunity to showcase their talents with the best singer/songwriters from around the country. More information: Sandyrootsmusic@gmail.com or (251) 284-2443.
Pictured: Matt Prater’s songs are a blend of traditional country and honky tonk with folk, and roots music influences. And his four albums are filled with stories of family, poetry, humble beginnings, honky tonk tales and Southern American tradition. Matt keeps a full schedule independently touring songwriter showcases, music venues and festivals and has played locally during the Frank Brown International Songwriter’s Festival.